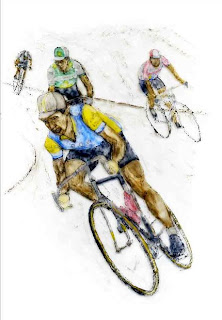 'La Cote de Laffrey, 1987.'
All images are copyright @ Richard Lee.
Now for sale as a greeting card
or print. Any questions? Feel free to email me: info@cyclingart.ca
I'm introducing my print called, 'Descente de La Cote de Laffrey 1987', now selling on Etsy. The Tour de France first introduced the mountain back in 1947.
Henri Desgrange presented the Pyrenees mountains in the 1910 Tour. In January of 1910, he sent his associate Alphonse Steines to survey the route ...in a snowstorm! Back then, mountain roads were little more than cow paths. As legend has it bears & outlaws were spotted along the route. And that's why the riders feared it as they trudged up the narrow, steep paths. True or false it surely added to the legend. It was a bold move by the tyrannical Desgrange to include the mountains. By including this element of adventure, made the Tour epic. And it was a great way to sell his newspapers. After this Tour, L'Auto was rewarded with a record circulation of 300,000 doubling the figure of 1908.
For this Tour, Desgrange relented, somewhat by adding the voiture-balai or broom wagon to pick up any exhausted stragglers in the race. In 1911, he added the Alps to the Tour, notably the Galibier. Desgrange wrote in a collection of poems, 'Adoration', of his love for the mountains...
Desgrange wrote, "Oh Laffrey! Oh Bayard! Oh Tourmalet! I don't hesitate to proclaim to the Galibier you are but pale and vulgar babies. In front of this giant there is nothing more for you to do but take off your hats and bow from down below."
The inclusion of the mountains changed the Tour forever. Riders now had to be adept at climbing to be successful. All those riders of yesteryear were amazingly resilient. They rode with canvas food bags on their handlebars with holes cut out at the bottom to let the rain escape. Spare tires were carried, wrapped around their shoulders. And huge goggles protected them from the grime, stones and the endless stinging dust.
I believe the 1911 Tour winner, Gustave Garrigou said it best, "It wasn't anything superhuman because we weren't supermen, and I'm the proof, a man like anybody else... because I climbed all the way up without walking. It was our job. The prizes, the primes, the contracts. I was a professional. It was just life!"
Artwork Etsy Mountain Fever Vintage Tour de France