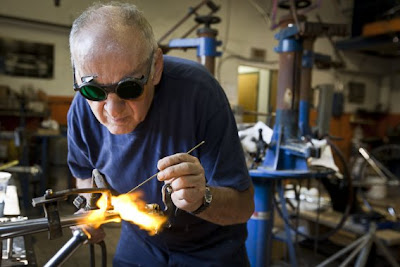 The master artisan, 74 year old Pepe Marinoni making
what he loves.
via cyberpresse.ca
Carolle discovered a very interesting French article of Giuseppe 'Pepe' Marinoni. And, thanks to her translation, and my archives, I'm able to present this post of the great artisan frame builder... Marinoni.

He's called nonno (grandfather in Italian) of handmade frame building in Canada. At the sprite age of 74, Giuseppe Marinoni is very active riding and building his famous bicycles. Not like and average man of 74, he's not the sort to spend his time in a garden. Oh no. He's as fit as any man half his age riding on average 9000 kms per year, sometimes clocking up to 100 kms at at time.

In 1964, Giuseppe Marinoni had just finished a race by the Saint-Laurent River. Luggage in hand, he was about to jump in a taxi to go back home to Italy, his old friend le pizzaiolo Fedrico Corneli, convince him to stay in Canada. Thankfully, he stayed. His calling was frame building. Growing up in the Bergamo region of northern Italy, he took apprenticeship from Mario Rossin, the top frame builder of Colnago.

In the 1960's he raced for the Italian team that paid an important visit to Québec. He met une Québecoise Simone, married her emigrated and then opened Cycles Marinoni in 1974. Since then assembling 35,000 bikes for Canada's best riders: Steve Bauer and Jocelyn Lovell.

Canadian Champion, Jocelyn Lovell apprenticed in Marinoni's workshop before introducing his Toronto made Lovell frames. I'm not surprised, his frames are exquisite and has that certain Italian touch. 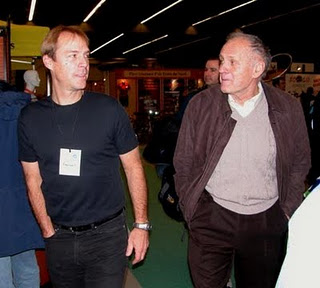 One of his famous students...
Steve Bauer & Pepe
Over the years, many other riders have sought and straddled his famous bicycles handmade in Terrebonne: Connie Carpenter-Phinney, Tom Morrris, Beth Heiden and Andy Hampsten are just a few who rode his masterpiece bicycles.

This great man, has brought the old world of frame building to the relatively new world of Canada. After many years of building some of the finest frames in Canada, Marinoni has attracted a loyal following. I can say, Guy and I count ourselves among this group.

Marissa Plamondon-Lu, producer of the Montréal section of the Bicycle Film Festival and co-owner of Vélos Bikurious, has organized an exposition on Marinoni, the frame builder. For her, Pepe represents the romantic side of cycling. 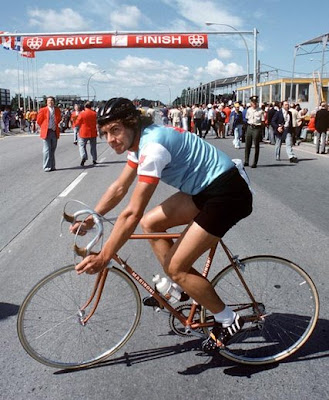 Marinoni is a true romantic, artisan of cycling keeping his business on a human scale. He says, "Bikes are not hard to make, but over the years, I found little tricks to better the production." Well known for producing steel bikes, the company also produces carbon, titanium and aluminum ...all custom frames.

Pepe tirelessly produces and paints around two hundred frames a year. Simone does most of the decaling (airbrushing) and keeps him in line. She actually airbrushed my name and the Marinoni script on my frame. A beautiful job.

A total of about 800 bikes are produced yearly in a efficient shop where Italian, French and English are spoken loudly. Keeping a personal, intimate staff makes for an enterprise uniquely his... small and simple. His son Paolo runs the business, after all, Pepe is 74 and deserves to be able to go out for a ride whenever he wants!
Inspiration Marinoni steel love