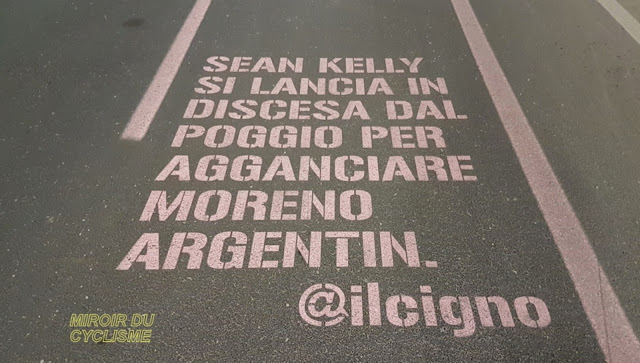 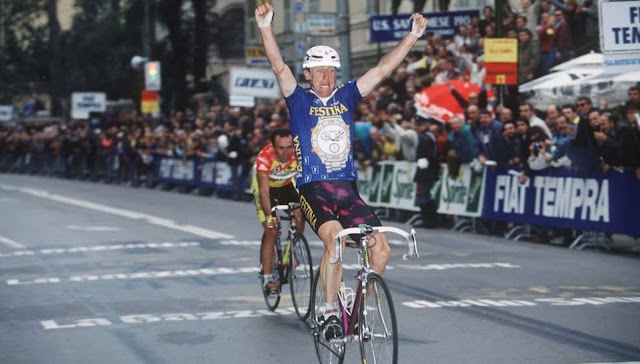 "Kelly is the man in blue dropping like a stone."
- David Duffield.

"What was I thinking as I plummeted down the descent of the Poggio in pursuit of Argentin? Was I really a man possessed, as they said? Had I abandoned all thoughts for my safety? Did I care whether I ended up toppling over the low wall and shattering through the roof of one of the glasshouses below?"

"None of this mattered. I was thinking of winning, nothing else. I was going to give everything to catch Argentin and win the race. If I finished the day lying on my face among the tomato plants and shards of glass, so be it."

"Over the years the story of the 1992 Milan-San Remo has developed a life of it's own. I've heard it said that my back wheel skidded around every corner and that I bounced off the walls on my way down, leaving scuff marks on the shoulders of my jersey. That wasn't the case. Perhaps people feel the need to embellish the drama. For me, it was more than dramatic enough."

"I pushed all the way down the Poggio, and I was getting that little bit closer all the time. Of course, when you look back at the footage you think it's unbelievable and crazy, but during the race you're in the zone and thinking about winning Milan-San Remo."

"And when you do the descent full-on - like he was doing, and like I was doing trying to catch him - then anything can happen. He was still a danger depending on how he was feeling. And that's what it's all about: how much energy you have left in the tank at the end of a big, long, difficult of the race."

"When you look back, I played it very well. Every second he was shouting 'tira' - 'pull' - and I just shook my head, opened my mouth big time and, you know, looked like I was in oxygen debt. He pulled on a bit, then slowed down again, looked around and gave me, you know, the wag with the top of his head, for me to come to the front. But as I said, if I went to the front, he would have been in control. So, I stayed put and made him lead out the final 600m. I was definitely in the better position, so tactically I played it well. I played it cool and it worked out."
- Sean Kelly