Love for BiC and Jacques' Class. 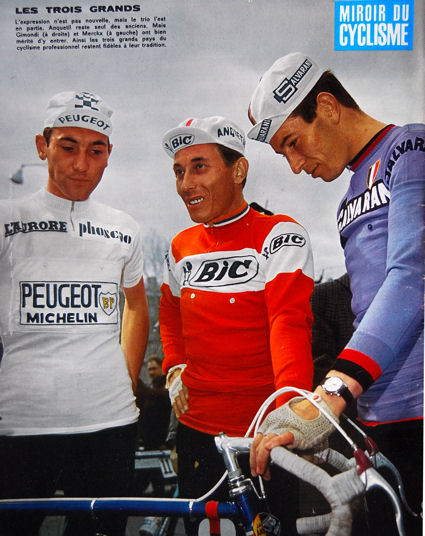 
The Bic jersey was one design, in a plethora of jerseys, that was iconically cool.

Think Moteni, Peugeot,  Flandria, Brooklyn, KAS, Salvarani, Bianchi, Faema ...some of the giants of the swinging 60s-70s. Not like today's proliferation of sponsors, early team jerseys were adorned with only one or two sponsors. I say it was a period of design simplicity. These days, Team SKY is the exception and seems to be taking a cue from that time and gone for a classic minimal approach.

In the 1960s and 70s, BiC sponsored a professional cycling team centered around Tour champions; Jacques Anquetil and Luis Ocana. Besides these two great riders, BiC had many others in the 'near great' category; Jean Graczyk, Julio Jiménez, Rolf Wolfshohl, Joaquim Agostinho, Roland Berland, Leif Mortensen. Who's Leif Mortensen you asked?

He was Danish, a tt specialist and rode for BiC (1970-74). His talent was full on speed against the clock and he was so good he teamed up with Luis Ocana to win the famous two person team time trial, The Trofeo Baracchi (1971). 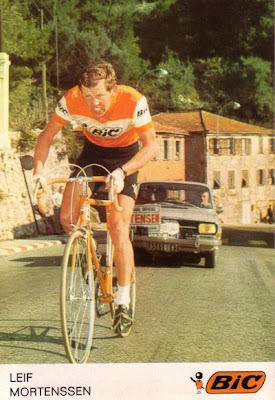 
One of the top domestiques of that time was Vin Denson. He was one of those tough riders employed to do the slaves work in riding for the star, Jacques Anquetil. And that era was tough. If you were not a leader or star then you are a worker. Underpaid and overworked it was a hard way of life. From the outstanding book, The Eagle Of The Canavese by Herbie Sykes, about the great silent champion of two Giri, I discovered this memorable quote...

I loved Jacques. I would have died on the road for him. We all would. He could suffer on a bike more than anyone else I ever saw, but above all he was an absolute gentleman. I'd spent the previous year working for Rik Van Looy, flogging my guts out, never being paid what I was due, always feeling cheated. The years I spent with Jacques were the happiest of my life, without question. The whole peloton respected him. Poulidor liked to be centre of attention, but within the peloton we knew him for what he was - a fabulous rider, but by comparison a bit selfish, nowhere near Jacques' class.


During this time, Denson opened a bar in Ghent and had what he called the happiest years of his racing life. Looking at the image of Denson ...no wonder he's smiling! 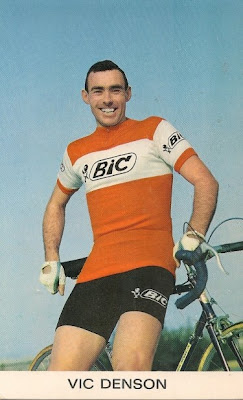 Dr.Purushothaman said…
An Excellent Blog-post Relevant to the Topic. It really generates a new thinking pattern in the viewers. Please pursue with your Blogging Activities.
Living In Wellbeing