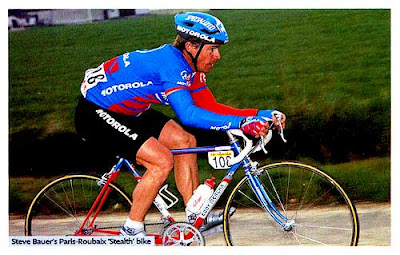 At the 1993 Paris-Roubaix, Steve Bauer unveiled his secret weapon …the stealth bike. He actually created this odd looking bike to battle the pave of Roubaix.

It was made of steel and had an unusual seat tube angle. It made Bauer look like he was fighting to stay on the bike. I did some research and found that a special seat had to be constructed with a high back to prevent him from slipping back. The bike looks awkward with a very long chain to a very long wheelbase.

Bauer’s odd bike garnered surprised looks and giggles from the peloton & press. I’m reading an entertaining book, Le Tour De Foglia by journalist Pierre Foglia. At the 1993 Tour, after the first ITT stage Bauer looked like he found his form. He was 29th, 33 seconds behind Miguel Indurain. A good spot for the veteran Bauer to be in.

Journalists were expecting to see Bauer with his new stealth bike. But he rode well with a normal bike at the ITT. “Where’s your funny bike, Steve?” asked the press. “I abandon my funny bike after the first week of the Giro. It wasn’t giving me enough mobility, so you won’t be seeing it anymore,” said Bauer.

You have to give him credit, he tried his Paris-Roubiax experiment and came in 21st behind the winner Gilbert Duclos-Lassalle. The Frenchman won for the second year in a row ...with MTB Rockshox suspension forks.

Jim said…
Hey Richard! I don't know what your connection to galstudio is, but I received a winter hat (the Kuiper red plaid one) as a Solstice gift. It's great. I've worn it down to 35F and it keeps my bald head warm and looks good to boot. It's extremely well made and washes easily, too.
January 12, 2010 at 10:55 AM

So you got yourself the winter with the gentleman cycling cap! Nice gift! The Gal behind Galstudio is my partner, and I'm the product tester!

Eric said…
I'd be interested to hear what the theory was behind this design. Bauer always put a lot of effort into experimenting with how he could be faster on the cobbles. With all the effort that went into putting this bike together I can't see it having been done on a whim.

Also, I'd be interested to hear Eddy Merckx's thoughts. I remember hearing Bob Roll talk about the year when Eddy started making the bikes for 7-11. He was completely hands on. Eddy flew out to California, measured each guy on the team and built each of them bikes that were custom to their physical attributes (I believe the clip is on competitorradio.com). The way I understood it, Eddy didn't care too much about what each rider thought, he built them the bike that he thought was right for them. My point being that if this is a Merckx (maybe it isn't) I gotta believe that Eddy was on board with it.
January 12, 2010 at 11:44 PM

Eric said…
Richard, one other thing. A while ago I had the thought that you should reach out to Steve Bauer and see if he'd be interested in being interviewed by you. My understanding is that your day job isn't journalism, but I think it would be really cool to have Steve answer some of your questions. You know a ton about his career. Maybe he'd be interested in sharing some of his thoughts with you.

Either that, or see if he's interested in following your blog and providing us all with a little insight on some of the extra details. With him running his own team and his touring company he shouldn't be too hard to track down.
January 12, 2010 at 11:51 PM

Great idea. I'm going to work on that.
There's very little on the stealth bike on line, It would be good to dig up more info on it.

Raouligan said…
I remember seeing a Cycling Weekly piece about that Bauer bike, I think the idea pure and simple was that the relaxed angles and lengthened stays would absorb some of the road shock from the Pave. I do remember it taking about a chain and a half for it to work apparently...
January 20, 2010 at 8:41 AM

I've heard about it. This is the first time I've ever seen Bauer's bike.

Georges Rouan said…
If I remember right- and I am going off of memory of the velonews coverage from the time- Steve did this bike on his own and was using it to prove his point and get back onto the Motorola for Paris Roubaix...there was some question at the time of his potency- which he proved he still had of course.
Great piece.
January 25, 2010 at 11:30 AM

Richard said…
I think he was entering the twilight of his career and wins were few and far between. I'm glad Eddy Merckxs took a chance on an unusual bike design.

Jerm said…
I work at a LBS in Greensboro, NC and the Bauer bike came up in conversation yesterday. Our shop owner who has been in the industry for 40 years told us that Merckx was against the idea of designing this bike for Bauer. And that when Bauer was done with it Merckx wanted it back so he could destroy it.
April 3, 2010 at 8:49 PM

I hope Merckxs never destroyed it and stored it instead...

robdapice said…
I stayed at the U-23 US Cycling team house of Noel Dejonckheere in 2001 and the frame was sitting in the back, mostly unnoticed, with a lot of junk around it. Nice article, thank you.
June 22, 2010 at 6:20 PM

DC said…
Just watching the Tour de France on EuroSport and the commentators said that he rode the bike to try to alleviate back pain. What a bike and fun to find a picture of it. Thanks!
July 16, 2010 at 7:16 AM

Unknown said…
I purchased this frame from Steve and still have it. It is lugged and has a 1 meter wheelbase like all race bikes. It was nicknamed "the chopper" in the peloton. You can push a large gear all day, but can't spin fast. It really stands out in group rides. I would sell it to someone that would appreciate it.
Rick
October 30, 2013 at 6:52 PM

Unknown said…
Steve had 3 different seat tubes angle frames built. I have the last version one that he used. He got to keep it at the end of the year, then I purchased it from him. I still ride it and it really stands out on group rides. every pro has 3 frames built, 1 painted and built, 1 painted but not built in the team truck, and the 3rd unpainted at the factory that can be painted if needed.
October 30, 2013 at 7:00 PM