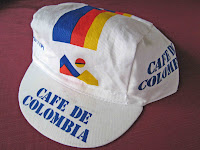 A day off from work is an luxury for a number of things: sleeping in, relaxing with copious amounts of your favorite cafe, not watching the clock, and going out for a spin. I'm not big on riding in the rain and I always try to avoid it, but, when you haven't gone in the last couple days - you go!

I waited for a break in the weather and decided this was my chance! It began to rain, and although it was on and off, I was glad to wear my "Cafe de Colombia" cycling cap under my helmet. It functions fantastically to repel the rain, cuts the wind, and acts as an insulating layer on your head.
The 1983 Tour de France was opened to amateurs and professionals, and Colombia was the only amateur nation to send a team. Tour officials hoped they would do well but they were at a disadvantage, with some of their best riders opting to stay at home for the Coors Classic and the fact that they were the only amateur team leaving them totally isolated.
But, they did return as professionals and in 1985 Lucho Herrera, also known as "el jardinerito" (the little gardener), set a record points total to win the Grand Prix de la Montagne (polka-dot jersey) and finished seventh overall. He would go on to repeat and win the polka-dot jersey in 1987. Also, he was the first ever Colombian to win a stage in the Tour and this happen in 1984.
He was a great climber and a true pioneer in the Tour.
coffee Colombian riders Grimpeurs Lucho Herrera Vintage Tour de France

Unknown said…
I loved your story about Colombian coffee and bike riders...Hope you keep enjoying your rides and our delicious café!