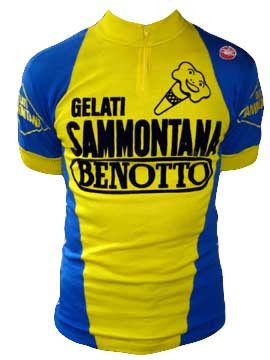 This is my second Italian wool jersey,  1982 squadra Gelati Sammontana Benotto. You guessed it, ice cream manufacturer; Sammontana and Benotto bikes. During the mid eighties in Edmonton,  I bought this cool looking jersey from a bike store that had a closing out sale. It's still in exceptional condition and construction. Felt lettering never looked so good!
American cyclist George Mount belonged to the team in '81 and '82. Another pioneer from the new world, riding in the old world. He finished in sixth spot at the 1976 Montreal Olympic road race with top guys; Jean Rene Bernadeau, Fons De Wolf, and Vittorio Algeri. Later, he would go on to win the 1978  Coor's  Classic Stage Race.
Mount belonged to a strong team, and he rode for star rider's; Moreno Argentin and Roberto Visentini.
That's Mount in his trademark sunglasses, 5th from the right.
favorite jersey's Giro d'Italia Inspiration