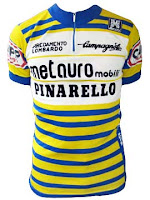 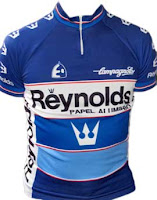 It was November 1984, in Treviso, Italy  that I stepped into the special world of professional cycling  to meet a very  interesting man.  His name is Giovanni Pinarello, famous for producing his racing bicycles and for the countless victories under accomplish star cyclists;  Guido de Rosso,  Fausto Bertoglio, Giovanni Battaglin, Miguel Indurain, Pedro Delgaldo just to name a few.  He came from a humble, rural background, eight of twelve brothers born in between the World Wars in Catena de Villorba, 1922.
I remember him as friendly, approachable and with a strong presence. He spoke no english,  I spoke few words of Italian. An assistant was called in to translate and all was well. I brought along my Velo City bike cap and team t-shirt from my Edmonton cycling club as a gift. He was so warm of this gesture he proceeded to give me a personal tour of his factory! I couldn't believe it!  We walked to the factory just beside the sales shop. It was  very busy  as I saw old and young men in overalls and work smocks  brazing tubes. I was free to walk about and to take pictures. They all work at a fenetic yet organize pace under the careful supervision of Giovanni Pinarello. He shows me everything in the plant, from the assembly section to the finish paint room. I marvel at a fully stocked warehouse , of course, with Campagnolo parts.  Beautifully, finished bikes were arranged neatly before shipping  to  destinations like South America and Canada. I even saw the "Metauromobili/Pinarello team car parked in front of the building.  I met team manager, Mauro Battaglini, and we talked about Steve Bauer's  3rd placing at the Worlds in Barcelona. He predicted that Bauer will pull a "surprise win"  at the Worlds in Bassano del Grappa.  It was not to be,  veteran Joop  Zotemelk  pulled the "surprise win" and outsprints Lemond and Argentin for the rainbow jersey.  We talk about one of my favorite climbers, Belgian star Lucien Van Impe. His contract will end  and he will eventually leave Metauromobili and ride for the Italian outfit; Santini Krups Conti.
As my tour comes to a close I spot a wonderful selection of team jerseys.  Most of the current jerseys are here: Gis, Carrera, US Pro, La vie Clare... I decided on Metauromobili and Reynolds. My favorite is Metauromobili because it's classic Italian craftsmanship of felt lettering on wool. As a final gesture, Signor Pinarello hands me stickers, crests, posters, a waterbottle, and a t-shirt as a parting gift. He graciously invites me back next year to watch the world championship road race. I noticed a hint of pride on his face when he said this.
After some 23 years, now,  I am a proud owner of these two jerseys and have very fond memories of this true gentleman artisan  from the old world of cycling!
favorite jersey's Pinarello steel love