Fritz and his collezione 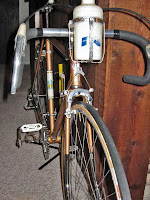 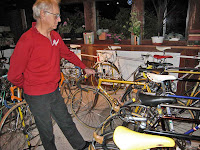 With the help of my friend Hans, I was introduced to a rather unique fellow, Fritz. I never ask his last name but, what's important is what I witnessed. When we drove over to his home, he welcome us by opening his garage door and I entered through a portal to a fa 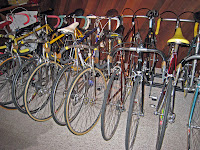 ntastic museum of bicycle history! By sheer volume, it should be housed in a museum, but it was in his basement of his modest home. To say the least, his Pinarello Montello's were cause to faint! A candy apple red with chrome forks and chainstay similar to the one ridden by Reynolds during the 1983 Tour! What an incredible site, all prestine well maintained and in near to mint shape! I even saw a replica to Alexi Grewal's multi colored bike that won the gold at the L.A. Olympics! But, his main collection of Italian thoroughbred's was in the next room! 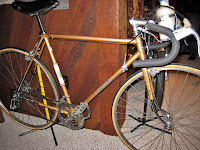 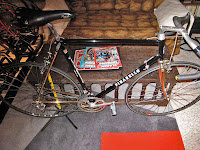 Fritz used to race his vintage Alfa Romeo's in the States around the seventies and eighties. He has the ability to collect and restore anything from four to two wheels. It is evident from his mint Alfa Romeo's, various racing motocycles and his bicycles. We move into the main room where the other fifty or so sit. Where can I start... a Lousion Bobet, Battinglin with 50th anniversary Campagnolo gruppo, Eddy Merckx's, Colnogo's, Frejus, Marinoni, Vitus, De Rosa's, Masi's, Gios Torino, Bianchi's, even a Roger De Valminck! I hope I haven't forgotten any! All the bikes were bought locally in various states of disrepair. Fritz lovingly restored them and during the years grew to have an intimate knowledge of each one. I still can't get over it, you would believe him if he was an ex-racer to have such an collection. But no, he's a passionate, loyal fan of racing bicycles with a knowledge of bicycle history. He reminds me a little of Giovanni Pinarello, very astute of his love for his bicycles. 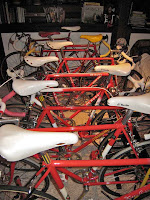 British bikes are also here, Legge and Holdsworth. I was impressed how each bicycle was propped with it's own stand. Sort of hey look at me, I look sooo damn good! And, it's true, there's a sense of order and history here where a slice of time is frozen. I was transported back to the fifties - eighties. They are all steel, except for a carbon Alan. "You can go in any bike store, order one off the wall and take it home," Fritz says, " But, with steel, you must look for it." It's true they are harder to find and when you do find one, you keep it! I'm glad that I have my steel Marionni SL, and you know... steel is real!
Fritz tells me that he would love to get his hands on a Bennoto! And, I can't imagine where he could put it! He invites me to ride with them and I mention that it would be great to ride in a peloton, again! He replies, "Oh no, we are not that serious, only the debriefing part is!" By the way, the debriefing is the beer after the ride!
I look forward to that!
Again, thanks to Hans and especially to Fritz... for his historical look into the past!