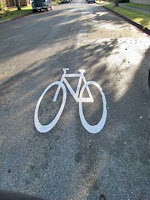 Man, this happened to me on my way back from work, Monday. I chose not to ride that day, but now I believe I would've been safer riding. It was dark, raining hard, as I waited for the crosswalk light to change... The light changed for me to walk and I stepped off the curb and proceeded to cross the street. I watched as a car from the oncoming traffic approached and signaled for a right hand turn. At this time I'm past halfway through the intersection when, though and behold, he doesn't see me crossing and almost runs me over!  Yikes, although I was wearing a dark jacket, I was equipped with a rather large RED umbrella!  The driver had a surprise/dumb look on his face as he slowed down... probably to put his heart back into his chest.

Now, if I wore my flashing bike lights he would've actually see me and stop!