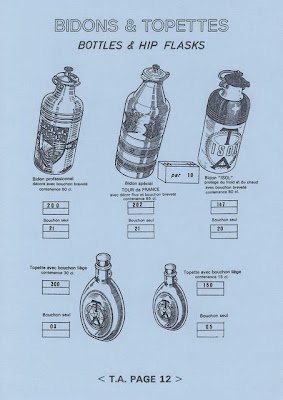 As much as I admire the stars of a cycling team, I have a keen respect for the watercarriers! I regard these riders in high esteem for their tireless efforts and ensuring a long standing custom.
Traditionally, cycle racing is steeped in old fashion virtues; bravery, stamina, sacrifice, courage, honor, and pride. In the hey days of the Giro d'Italia and the Tour de France, it wasn't unusual for rider's to drink, along with water, wine, beer, port, and cognac. In fact, roadside spectators often handed riders champagne, widely believe to be an effective stimulant. One of the most popular tonics was "le vin Mariani", which combined with wine and coca leaves was even recommended by the medical establishment including the French Academy of Medicine! I'm surprised that most riders didn't develop Cirrhosis of the liver. Topettes or hip flasks were also used to conceal these medicinal drinks and conveniently hidden in jersey pockets. In the Giro d'Italia and the Tour de France, tradition dictated supporting riders would fetch refreshments for their star's from no other than, small cafe's and inn's! Riders would rush into cafes and take as many cold drinks as one could carry. Cafe owners considered it an honor to have their stock pillaged. Since next day they sent a bill to the race organisers, asking for compensation. Riders packed their jerseys full with bottle's of Coca Cola, fruit juice, carbonated water, and yes even beer as they rush back to the peloton to their thirsty leaders! Imagine the sheer weight of liquid and glass as you have to drag it back to the pack! The ingenious ones would carry a bottle opener attached to a cord around their neck! Thus the name, "watercarriers." In fact, it was  against the rules to obtain drinks except at the designated cafes. Often, riders would break this rule and be penalized with fines.
This charming tradition of the Giro and the Tour introduced the watercarrier as not only a good cyclist, but best of all... valuable at supplying water and other refreshments! 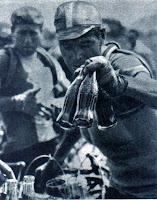