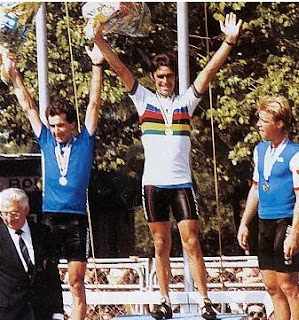 Steve Bauer entered the 1984 Los Angeles Olympics with a quiet determination to win. He was part of the Canadian Olympic pursuit team selected to the ill fated 1980 Moscow games. In the early 80's, he rode very well and had spectacular performances namely in the Coors Classic and the Lowenbrau Series in the US.
Nineteen eighty four beckoned and Bauer honed his bike racing skills for the GS Mengoni Team.  The owner/coach, Fred Mengoni, had a knack of finding gifted riders and turning them into excellent racers for his amateur team. Mengoni, a former racer from his native Italy, did very well in real estate and decided to fund an amateur cycling team in New York. Real estate was his interest, but cycling was his true love. He recruited the talented Bauer and under his coaching crafted him through the rigors of stage and criterium racing.
On July 29th, the Olympic road race was set under hot conditions, from L.A. to Mission Viejo over a challenging  course of 190 km! What a race it was,  after more than 4 hours of grueling racing, two riders were left, American Alexi Grewal and Bauer! I remember the televised pics as both riders played a cat and mouse game trying to feel each other out. Grewal wouldn't work as Bauer had teammates in the chase group behind. So, Bauer would have to drag Grewal to the line and kill him in a sprint. Ironically, Grewal almost missed the games, he was suspended by the U.S. Cycling Federation three weeks ago for using a banned substance; phenylethylamine, an amphetamine stimulant. But the U.S. Olympic Committee gave him permission to use a related asthma drug, and he won reinstatement for him a week before the games.
As they approached the run in towards the finish, one cannot help but feel that Bauer could take it. As Bauer pulled on his leather toe straps to get ready for the sprint, the tv commentator said, "Bauer is the stronger and will take Grewal in the sprint!" I believed him. I think Grewal knew this, too! The last 100 metres came to an amazing sprint... as Grewal just edged Bauer for the gold. Sadly, Bauer made two crucial mistakes; underestimating Grewal and choosing too big of a gear for the final headwind sprint. That heart ripper of a finish would be etched in the minds of cycling fans forever.  Twenty one seconds behind, Norway's Dag Otto Lauritzen would grab 3rd place.
There was a silver lining in it for Bauer, having won the silver Olympic medal he turned professional and was allowed to ride the World's in Barcelona! Bauer took a fantastic 3rd to claim bronze behind strong riders Claudio Corti(silver) and the infamous Claude Criquielion(gold).  The bronze medal was the icing on the cake for Bauer, and afterwards he signed with the powerhouse La Vie Claire French team.
Bien mériter,  Bauer!
Coming soon: The French Connection, Part 3! 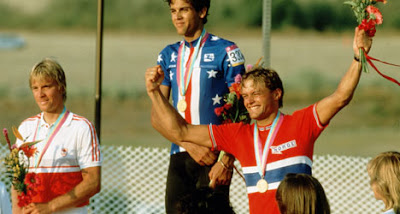 Eric said…
Like you I grew up watching Steve Bauer make his way through the world of amateur/pro cycling.

Great write-ups on a guy who gave me so much inspiration to ride a bike. I just wish that he'd been able to pull out just one of the near misses he had at the Olympics or at Roubaix.
March 27, 2009 at 11:52 AM