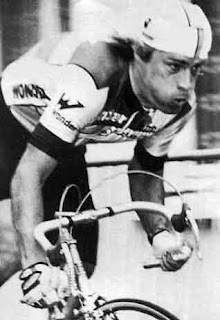 French business tycoon, Bernard Tapie had a way of running his companies into successful ones.  Buying bankrupt companies, reinvesting and selling them at a huge profit made him a rich man. As his profits rose in 1984, he looked toward the US market. He had already lured Bernard Hinault from Renault to his new La Vie Claire team. He approached the young American Greg Lemond with an offer he couldn't refuse.
Tapie  introduced large salaries into cycling when Lemond accepted a salary of 1 million dollars over 3 years making him the highest paid cyclist in the world. To bolster his powerhouse international team , Tapie contracted Swiss coach Paul Koechli, Frenchman Jean-Francois Bernard, the Danes Kim Anderson, Kim Eriksen, American Andy Hampsten, Swiss riders Niki Ruttimann, Guido Winterberg, and Canadian Steve Bauer. This formidable group was formed to help Hinault win the 1985 Tour with Lemond as his lieutenant.
After securing the bronze medal at the 1984 world's in Barcelona, Bauer quickly signed his new pro contract with La Vie Claire. 'Le Canadien'  finished an incredible sixth best in time trialing. His tremendous first tour saw him hold the white jersey for 18 stages before a bad day saw him drop off  a few positions. In the last week, he fought back to finish in a brilliant 10th overall and 3rd in the young riders category. Bauer looked very different from the sad rider who gave away the Olympic gold to Grewal in Los Angeles.
In fact, La Vie Claire had 4 riders finishing in the top 15 in g.c. Tapie needed new stars like Lemond and Bauer to help him into the U.S. market and also to help the popular Hinault win his 5th Tour. Although, Lemond had the skills to win the overall he had to 'learn' prudence. He was frustrated on the famous Stage 17 climb before La Mongie, and was told by Koechli not to attack or lead anymore. It was here that Hinault was experiencing breathing difficulties, from his broken nose in a crash in St-Etienne. Lemond backed off on his pace and let his chance for victory slip away, with the understanding that the favour would be returned.  Both, Tapie and Hinault had the business savy to know that the future of cycling would be international. They were right.
For Bauer, the rest of the 1985 season resulted in solid placings in the Dauphiné Libéré and the Tour du Haut-Var. His aggressiveness earned him respect in the peloton and a place in the french fan's hearts. Canadian fans came out in droves to cheer on our new cycling hero. He proved his worth and looked toward 1986.
His door of opportunity was just opening! 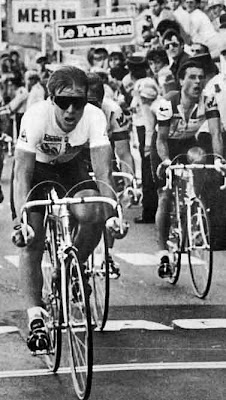 Thanks for your comments. It must've been quite a site seeing Bauer haul the two stars up!