An old cycling repair kit with a temporary patch.

I looked in my tool box and found this nifty French made Velox tubular tyre repair kit no.5, circa 1985! I'm not sure what no. 5 stands for. Anyways, it's complete with thimble, crayon, patches, 8 meters of fil de lin, glue, and instructions with detailed illustrations all in a nice metal container. Now that I ride on clinchers this remains as a museum piece. Velox is one of the oldest cycling/accessories company based in France, founded in 1903 and still going on strong! An interesting side note, today, the 91st Giro d'Italia organisers announced the 2008 route and called for a clean race. Race director, Angelo Zomegnan said, "the riders selected for the Giro will have the new biological passport. We want riders who are honest and who will avoid any short cuts." In 2008 all professional cyclists will submit blood samples to create a medical profile(I shiver when I hear this word!) to monitor against possible doping. It's only a temporary patch job to the tarnished sport of cycling. Like most folks, I'm not a fan of doping, but the powers of cycling has a huge job ahead to right a ship that has an open secret for nearly 100 years! 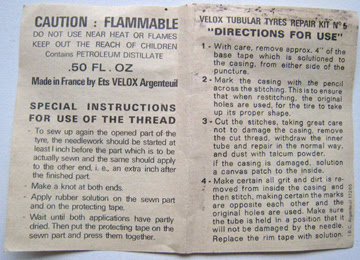 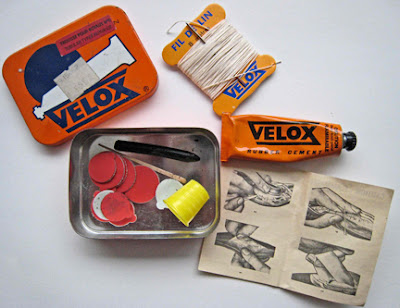