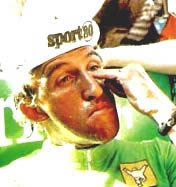 "Ogre": A monster usually represented as a hideous giant who feeds on human flesh. Not a flattering nickname, but in this case, it's befitting of the great Belgian sprinter, Freddy Maertens.

He was one of my favorite sprinters and I always admire his tenacious ability to torch any rider when the last 100 metres came up. He was one of a handful of unlucky guys to challenge the 'Cannibal'. Merckx's historical 1969 Tour win placed him on the pedestal as the new Belgium cycling god. There was no room for any other stars. When De Valeminck won the 1969 national championship, he was treated to whistles because he took the spot reserved for Merckx. Maertens turned pro after the 1972 Olympics where he finished 13th. The young and talented Maertens pissed off the public by blaming Merckx for his defeat in the 1973 World Championship in Barcelona. Could it be a contest between Campagnolo and the up and coming, Shimano? "He must have decided that Gimondi would make a better winner. And that's simply because Felice Gimondi, 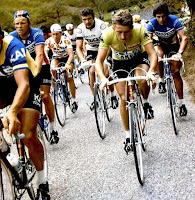 like Merckx, rode with Campagnolo. Shimano, for whom I was riding, was the up and coming rival of Campagnolo. Tullio Campagnolo called Walter Godefroot and passed on the message that under no circumstances was the world championship to be won by a Shimano rider", claimed Maertens.

During his first 3 pro seasons, he won an astounding 80 victories and everyone knew he had the talent to rival Merckx. Maertens had only one way to go, battle as Merckx does, like a cannibal. He did, and his palmares grew with big wins in: Gent-Wevelgem('75, '
76), Paris-Brussels('75), Paris-Tours('75), Amstel Gold Race('76), and Züri-Metzgete('76). In 1976, Maertens racked up 54 wins, and finished 8th in the Tour de France with 8 record equalling stage victories. He easily won the green jersey of best sprinter with his amazing first Tour appearance and showed that he was the time trial king by winning 3 out of 4 ITT stages. At the 1976 World's in Ostuni, Italy, he showed his classic sprint beating Francesco Moser. 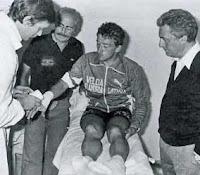 He then crushed his opponents at the 1977 Vuelta by dominating, à la Merckx, winning the overall, points classification, and 13 out of 19 stages. That years Giro was his achilles' heel. He won 7 stages and looked towards the overall, but, a fall in the Mugello autodrome forced him out with a broken wrist. This was a precursor of the end to his career. Maertens achieved 53 victories that 1977 season, prompting Merckx to admit he was the strongest rider in the peloton. Then, his career went into a tailspin. Wins were few a far between. In 1978, he won only 18 races, but he did manage to win his 2nd green

jersey including two stage wins in the Tour. Incidentally, that Tour turned into a shocker with the Velda-Flandria team unravelling due to Michel Pollentier's expulsion from being caught trying to pass off someone else's urine as his own during a drug test.

Maertens fall was partly due to his fervent use of the 12 tooth sprocket. Surprisingly, he never had the problems normally associated with the abuse from it ... the tendinitis in his knees or Achilles tendon damage. Then he faded and suddenly resurfaced at the 1981 Tour, in true fashion. He literally came back as that monster from the dead. On the new Sunair-Sport 80-Colnago team he showed his old panache and once again, dominating the sprints, securing his 3rd green jersey, winning five stages including the final prestigious stage on the Champs-Élysées. For an encore, he won the big sprint and was victorious in Prague at the 1981 World Championship road race, outgunning Hinault and Saronni.
But it wasn't all rosy, his critics started to question his new found success and rumors were spreading through the cycling world. He was using drugs that could not be detected by the doping tests.

Some even said that his urine was poison green and he acted drunk racing. Constant doubt set in, his lingering wrist injury, pressures and stress brought his career to a slow end as he bounced around with lackluster teams finally retiring in 1987.

His autobiography was published, "Not from Hearsay", an account of how the jealous cycling world was pitted against him. He was convinced that certain envious persons, put a 'spell' on him, and as a result he had gone through treatment by ... exorcists. Only Freddy Maertens would know if this had purge any of his demons - we will never know. One thing we do know, that his dramatic roller coaster ride of a career certainly placed him as one of cyclings' greatest sprinters! 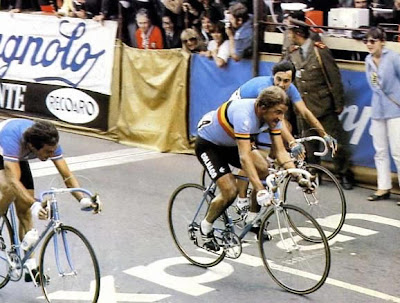 All photos from The Fabulous World of Cycling.