Taking care of the boss 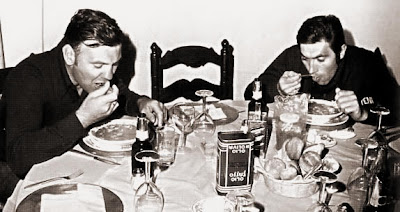 As you know, I enjoy writing about cyclists, but I want to share with you these great image's of an unsung hero ... the soigneur. This is Guillaume Michiels, taking care of his boss, Eddy Merckx. He was the ultimate servant, and made sure that Eddy was well looked after with; massage, a proper diet, motorcycle pacing, chauffeur to races and acting as a body guard. He took a role that only an select could do. Michiels, a former racer was really a domestique from 1959 to 1962 and served for many famous racers; Adoni, Bitossi, and Van Looy. He had a short, unremarkable cycling career but where he really shone was behind the limelight of 'the cannibal.' In 1962, he announced his retirement and went into the coffin making business settling in Brussels. He was soon known as, 'The Grave', and due to his reserved and aloof demeanor provided Merckx as his trustworthy confidant. The cannibal's success was 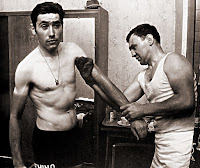 not only supported by his indispensable teammates but in a rather large way by his devoted soigneur. "Loyalty and good performances were generously rewarded by Eddy," said Michiels.
Il était un soigneur extraordinaire.
Michiels, taking care of the boss, a 'grave' undertaking!
Photo's from, "Eddy Merckx."
Eddy Merckx Soigneur