Darkside of the rainbow, part 5

on February 10, 2008
Steve Bauer and Claude Criquielion were the only two left after 7 hours racing in the 1988 world championship road race in Ronse, Belgium. It was August, 28th and from a field of 178 ... it seem like deja vu. Flashback to the 1984 Worlds, Bauer and Criquielion were amazing with Criquielion winning his first rainbow jersey and Bauer finishing 3rd, a month earlier Bauer was a very close second at the Los Angeles Olympic road race.
With meters to go the Canadian and the Belgium sprinted and, what now is history, both didn't win. Bauer sprinted close to the barricades, Criquielion responded and tried to pass him on the inside, between him and the barricades. Bauer's elbow flew up. Criquielion crashed, rubbed against a policeman and then hitting the base of the barricade. Bauer swerved but kept his balance.
During the mayhem, a surprised Italy's Maurizio Fondriest crossed the finish line arms held high for the victory. Bauer visibly dejected crossed the line head down. Moments later, Criquielion limped in dragging his wounded bike and looked pissed shaking his hand in protest! I can still remember a picture of Bauer, straddling his bicycle, in tears being consoled by Greg Lemond. Bauer lost his chance for the rainbow jersey, he was disqualified, a first in the history of the race. Criquielion was livid and sued Bauer for assault and for $ 1.5 million for the loss of the rainbow champion's jersey. A first in professional cycling.
But, contrary to the disqualification and after witnesses viewed the race tape, Criquielion actually bumped Bauer first as he tried to pass. Bauer's elbow was, pure and simple, a reflex action. In 1991, as the court case dragged for more than 3 years, Criquielion quietly retired from racing. The following year, in 1992, he did not show up in court when final testimony was heard.
Finally in 1993, and after 5 long years in a drawn-out court battle, Steve Bauer was rightly exonerated of the assault charge.
For Claude Criquielion, after an accomplished cycling career, I will also remember him as, 'the sore loser of Ronse.'
"The presumed elbowing that led to the assualt charge" 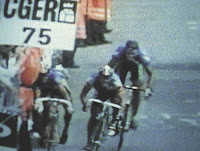