The Flea on top of the mountains

This year's 2008 Tour de France marks the 75th anniversary of the introduction of the coveted grand prix de la montagne, or the King of the Mountains competition.
In the 1930's, professional cycling really began to change. National teams, better road surfaces, improved bicycles, tailored clothing, tactical approach to racing, and live radio broadcasts were now commonplace. To offset race costs, Tour organizer, Henri Desgrange introduced the publicity caravan.  Also, new innovations for the 1933 Tour:  a clockwise direction and the Pyrenees crossed in shorter stages, 4 rest days, and the introduction of the KOM competition. Hard earned points were  awarded to the first riders across each major mountain summit, according to difficulty.
Spanish rider Vicente  Trueba  entered the 1933 Tour as a "touriste-routiers."  The touriste-routiers was a name given to riders not competing among the ranks of  professionals. I like these guys, they were the plodders the underdogs, they were not under contract with the big name bicycle manufacturers. They had to fund their own ways in cycling, often learning from hardship. But, they were hungry to compete and to win, Desgrange and the professionals knew this.
Trueba fit the classic climber's build;  compact, sparrow like. He was a small man, just over 5 feet tall and 120 Ibs. He was one of the 40 "touriste-routiers" allowed to participate beside the 40 professionals(aces) in this 27th Tour.  It maybe a combination of his Spanish climber's pedigree or his feather light physique because he soared easily over the major cols. One by one, he was the first over the top: Ballon d'Alsace, Galiber, Lautaret, Vars, Braus, Port, Peyresourde, Aspin, Tourmalet, and Aubisque. Desgrange was so impressed with the little Spanish grimpeur describing his style as, "giving jumps on the pedals of his bicycle." He gave Trueba the nickname, "the Flea of Torrelavega."
For all his climbing prowess, he lacked descending skills and as a result,  he didn't win one stage and finished 6th overall.  Nevertheless, he acquired 134 points and was the winner of the first King of the Mountains title. The flea never had the wonderful opportunity  to wear the flashy polka dot jersey,  it didn't make its debut until 1975.
The 75th anniversary is coming up,  I'd like to see the Tour honor  Vicente Trueba, the "Flea of Torrelavega" ...  one more time! 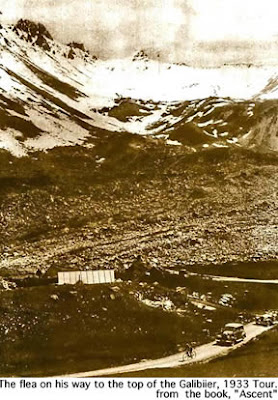 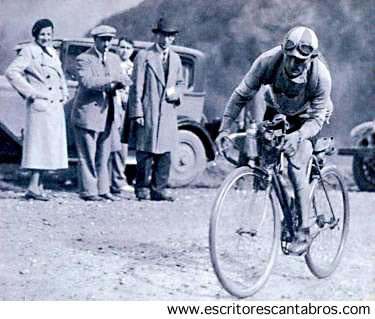