'horse from the north' 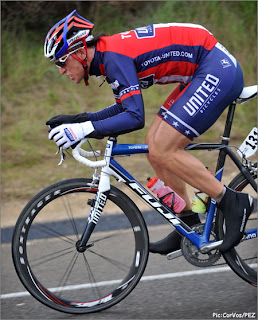 Honorable mention goes to second year pro, Dominque Rollin as he unleashed his horses to victory on the bone chilling 4th stage of the Tour of California. It's so refreshing to see the "horse from the north" win the 71/2 hour rain filled 135 mile stage. He's only 25, originally from Boucherville, Quebec and with this win has moved up to overall in the points classification (green jersey).
"We call him the 'horse from the north' because he's all muscle. He's all power and his numbers are really phenomenal," said Toyota-United manager Scott Moninger. But, it was a day of hardship for 12 riders abandoning due to the cold temperatures(12 degree Celsius) and 25 kmh headwinds. "The conditions were terrible. It was a headwind all day... my core was so cold, the wind just went right through you," said classics veteran, George Hincapie.
Rollin confidently remarked, "The last time I raced in this kind of weather I won. Even if when I am on the bike I think 'I can't stand this,' the worse it is, the better I do, so keep it coming." He seems worthy for a shot at the overall. I'd love to see it.
For the 'horse from the north' ... it's a befitting nickname!
(photo): The 'horse from the north' forcing the pace onto stage 4 victory, 2008 Tour of California.
Dominque Rollin Tour of California