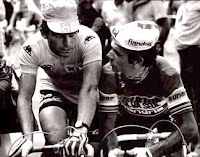 Bernard Hinault(left photo) once described Joaquim Agostinho as, " a large rider, very combative, a true warrior. It was a pleasure to have him as an adversary." It pretty much sums up the kind of rider he was. "Tinho", as he was affectionately called had a cycling career that lasted from 1968-1984.
Joaquim Agostinho was born April 7th, 1943 in Torres Vedras in Portugal. The fact that in 1968 he was discovered by cycling guru, Jean De Gribaldy at the age of 25 was a precursor to his meteoric rise. De Gribaldy, a former french racer was well known for building formidable cycling teams and discovering cycling stars. He was a wealthy businessman selling funiture and running professional cycling teams. And, he approached Agostinho in 1968

in an amateur race in Brazil, saw his potential and offered him a contract. Word has it that Agostinho answered with a smile to seal the deal.
His palmares were numerous; 6 times national champion, 1969 Trofeo Baracchi with Herman Van Springel, 3 times Volta a Portugal (26 stage wins), 2nd Vuelta a España(1974), and 2 stage wins in the Tour de Suisse. From his 13 Tour de France appearances, he never finished lower than 15th. And, for a man who started relatively late in his cycling career his age knew no bounds, especially in the Tour. He placed 3rd behind Zoetemelk and winner, Hinault in both the 1978 & 1979 Tours at the ripe age of 35 & 36 year's old respectively. Yet, his crowning achievement was a brillant solo finish on stage 17, from Moutiers to L'Alpe d'Huez!(right photo) No one can blame him for not trying, and at the incredible age of 41, he would finish 11th in the 1983 Tour. Eleventh place in his last Tour was truly remarkable as the high mountains was too much for the veteran leader of the Sem-Mavic-Reydel team. But, what tenacity he had! He was rightly given the nickname, 'the Hulk.'
But, with great stellar careers his was short lasting. During the 1984 Tour of the Algarve a dog step out in front of him. He never wore a helmet, always found it uncomfortable, and fell landing on his head. Amazingly, he got back on his bike, helped by his teammates and crossed the finish line. The nearest hospital was some 400 km away, and if it was closer, perhaps he would've lived. Joaquim Agostinho went into a coma and died 10 days later, on May 10th, 1984 in Lisbon. The funeral was attended by thousands of fans and he was mourn as a national hero.

Monuments were erected to the legacy of this ageless racer ... the beloved Tinho from Torres Vedras. 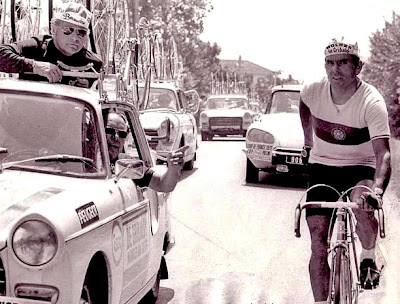 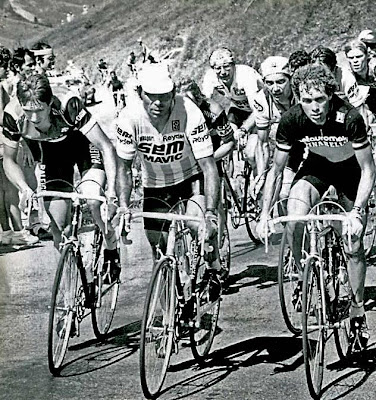 His final Tour in 1983, 'Tinho' (Sem-Mavic) at the head of the pack dancing with les grimpeurs. From Tour 83.
Photos: 1, (www.jeandegribaldy.com), 2 (www.veloluso.blogspot.com)
Vintage Tour de France