Slipping into the argyle gear

on February 04, 2008
Canadian, Ryder Hesjedal did an excellent ride in Sunday's GP La Marseillaise finishing on the podium in 3rd place just out of reach of winner, Hervé Duclos-Lassale(the son of Gilbert). It was the first race to open the 2008 European calendar. This year he's on the new 'anti-doping', Jonathan(the crusader) Vaughter led Slipstream-Chipotle Team. You know the guys in that funny argyle. Hesjedal is originally from Victoria, British Columbia. A strong rider who is a seven-time former World Mountain Bike Medalist before shifting to the roads. Most notably helping Floyd Landis on the now defunct, Phonak Squad.
It now appears that his role is a domestique, and on a given day ... to go for a win. That's what happened at the GP La Marseillaise, when he found a break, sprinted and finished on the 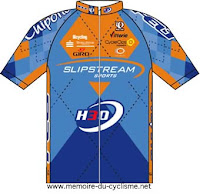 podium. He shows a similar talent just like fellow Canuck, Steve Bauer! And, he'll be in good company with strongmen; Millar, Zabriskie, Dean, Danielson, Backstedt and Sutton. After coming off a successful Tour of Qatar(Chris Sutton, 4th overall), and selected for the Giro, the daring Slipstream team seems to be heading towards an optimistic 2008, with the Tour in site. My fingers are crossed. I hope this team gets to ride the Tour. To see Hesjedal and crew win more races would be fantastic but, also to see if they can positively(pardon the pun) ... change the tattered, worn out cycling establishment with their argyle wearing, new anti-doping attitude.
Ryder Hesjedal