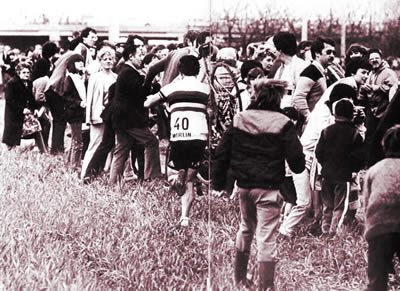 The Badger scampers à la cyclocross, just before the encounter with the poodle.
Photo: The Fabulous World of Cycling.
With only a month away from the queen of the classics; Paris-Roubaix, I'll be offering some stories as a lead up to the great race.
First run in 1896, next month will be the 106th edition of this glorious race. One cannot help but be in awe over the endless winners and losers that survive and not survive the Hell of the North. It's the most challenging event in cycling. Many cyclists pen their entire season on this torturous race ... to win. Although, for many it maybe futile, but all of the riders know to win means legendary status. The cobblestones together with the crazy weather provide the chaotic stage where the riders are the main actors. To be successful in Paris-Roubaix, a rider must suffer. And suffering is the key in entering into martyrdom. The fans know this, too.
Bernard Hinault knew he had to win it in 1981. The Badger was wearing the rainbow jersey of world champion, already had 2 Tours, a Giro and a multitude of other victories going into the race. Hinault confessed that he hated it, said so without blinking. "This is like pigs at play," he shouted. But, although the pressure came from his critics to win the race with the coveted rainbow jersey on ... the Badger relished in the challenge. He started to sharpen his claws.
Hinault encountered muddy roads, flats and falls, nothing out of the ordinary. But, just before Valenciennes he dismounted to avoid a crash of riders. And, like the cyclocross rider he was, the Badger placed his bike on his shoulder and ... ran around a group of surprised fans! More drama awaited, with 12 km's left he boots a black poodle that crossed his path. That poor dog should never have tangle with an angry badger!
Soon, the Badger found that his efforts in this hellish race working well for him as he was one of six riders on the Velodrome track. Nothing could stop him, as he powered his way to win in the final sprint. His victims: a very close: De Vlaeminck(2nd) and Moser(3rd), followed by Van Claster(4th), Demeyer(5th), and Kuiper(6th). Hinault was a living legend.
Afterwards, the delighted Badger proved that he could beat the best ... while happily waving the finger at his critics.
Bernard Hinault Paris-Roubaix