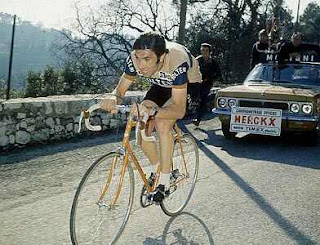 With the start of Spring, a cyclists fancy turns to … Milan-San Remo. La Classica di Primavera(99th edition) is held this Saturday and promises plenty of excitement.
With a distance of 298 km, is the longest one day race of the season. Tailored towards sprinters, a rouleur, in the right situation, can also win. If the winner is Italian, all the better, as the rider will be King of Italy for one day.

Interestingly, Filippo Pozzato(Liquigas) said that he will go on the attack to make sure that the race does not end in a sprint finish. There’s an extra climb and a new finish along the coastline that may actually help him. “The extra climb is 100km from the finish but it’s 4.7km long and so will hurt the sprinters’ legs a little,” said the 2006 winner. He has a valid point and experts have pegged ‘Pippo’ as a favorite. You may remember during his 2006 win, he broke away in the last km's for the win.

Erik Zabel, the aging wonder of Team Milram, has a chance. And credited with 4 wins would love to end his career with a 5th. But, in a mass sprint, he knows that the other big sprinter’s will be slugging it out with him for the line. Namely, his teammate ‘Ale Jet,’ Alessandro Petacchi, Juan Antonio Flecha(Radobank), and Oscar Friere(Radobank) are other potential danger men. I'll pick the ‘god of thunder,’ Thor Hushovd(Credit Agricole) to be victorious.
Ahh! Springtime in Italy!
(photo); Hard to beat his record. The Cannibal grinding it out towards his record 7th win in 1976.
Eddy Merckx Milan-Sanremo The Monuments