The Flying Milkman; a classic(s) rival 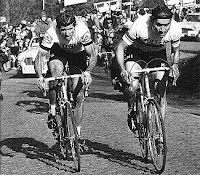 With the introduction of the cycling season, focus on one of Belgian’s early hardmen of cycling seems appropriate. Frans Verbeek was one of those famous Flandrian riders of the seventies that gave Eddy Merckx ‘s fits in the spring classics. His is an interesting story. He started his cycling career in 1963(at 22 years old) and after the 1966 season called it quits. Because, he rarely had wins thus he hardly made money. This was the typical mindset of the sixties: no win no pay. Verbeek turned to work in his family dairy business, driving a milk delivery truck. It was lucrative certainly more so than his brief cycling career. But, its hard for a tough Flandrian to leave cycling. A return to his former love was imminent…

During the winter months of 1968-69 he trained and trained hard. His winter training was legendary. He was one of the first to ride all winter. The more rain and sleet the better. His winter training ground was obvious, in and around his home town of Wilsele. Soon the results came and the real racer emerged. Verbeek won the 1970 Het Volk, the 1971 Amstel Gold Race, and again Het Volk in 1972. In a sport that loved nicknames, his was one of the best, his fans called him, ‘The Flying Milkman.’
During the spring classics of 1973, Verbeek was Merckx's biggest threat. That year's Liege Bastogne Liege was memorable. Amidst the snow and the bone chilling cold two great classic riders fought towards the finish line at the Rocourt track. Just three weeks before at Ghent-Wevelgem and the Amstel Gold, Merckx beat Verbeek into second place. And at the Rocourt track, Merckx did it again winning by just two centimetres from an ever frustrated Verbeek. He was the eternal second. Between 1970-1977 he stood on the classics podium 13 times winning only twice; 1971 Amstel Gold and 1974 Fleche Wallonne.

Perhaps this was the Flying Milkman's legacy. To be involved in cycling wasn't enough, he was typical of the tough Flandrian cyclist and even truer as the brave rival to the great Merckx in the Belgian classics.

photo: The Flying Milkman(left) vs the Cannibal: duelling on the pavé.
Eddy Merckx favorite jersey's The Classics