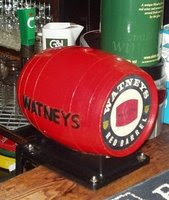 What does beer have to do with cycling? Besides from tasting damn good after a long ride there's the business side to it.  Previously, I talked about, 'the Flying Milkman',  Frans Verbeeck and his great involvement in the classics. During 1970-75,  he rode for a  team  sponsored by the famous British brewery,  Watney's.
In the early days(the fifties) of cycling sponsorship, alcohol companies were one of the first to jump into the untested business waters of cycling. It was simple, they brought the necessary money to front a competitive team and to have exposure.  Watney's had another idea. The brewery had a cycling team because they wanted to open English theme pubs in Belgium! 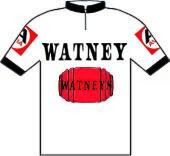 What were they thinking? They even employed token British cyclist, Peter Head to speak at the openings. Head wasn't only a speaker, he was a very good support rider for Verbeeck and won his share of races.  However, in beer mad Belgium (over 450 varieties and counting), it didn't work!
It would be uncharacteristically to order a Watney's with your mussels  and frites...
Just ask any Chimay or Duvel!
Beer