Paris Roubaix is coming. For one day this April 13th, northern France hosts this unusually, insane race. The weather holds the cards in this game in hell. Riders will try to beat back the unrelenting cobblestones and if it rains, the course turns into grooves of muddy ruts. And, if the wind doesn't get them it's the falls, crashes, cramps, aches, choking dust, cold, rain, flats, damaged frames, clogged gears/derailleurs/brakes ... the occasional dog.
Jacques Goddet called it, "a hardship approaching the threshold of cruelty."
"What I saw was frightening. Water, mud - terrain at the extreme limit of practicability. I would never have imagined that Paris-Roubaix would be as bad as this," shuddered Giuseppe Saronni, looking over the 1978 course. 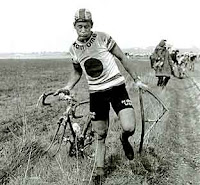 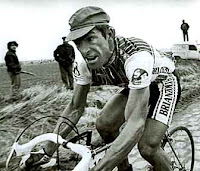 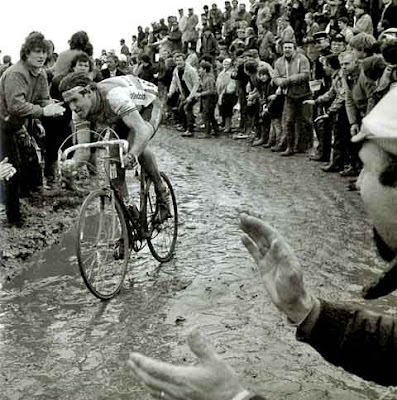 1984. Alain Bondue(he will finish in 3rd) chases after Kelly and Rogiers despite having cracked forks.
(Top): 1978. De Vlaeminck, Maertens, and Raas on the skating rink of mud. From, 'The fabulous world of cycling.'
(Middle, left): 1967. Jacques Cadiou, done!
(Middle, right): 1986. Francesco Moser - pure intensity!
The rest from, 'Paris-Roubaix A Journey Through Hell.'
Paris-Roubaix The Monuments

Unknown said…
I'm looking forward to my first edition of this race.Heard so much about it and only hope that they show it live on the TV over here in Israel.
April 1, 2008 at 12:55 AM

Roman Holiday said…
Great site you got here. I linked you up to KISL.
http://keepitstreetlevel.blogspot.com/
April 2, 2008 at 4:23 AM