The Tour of Good Health … 'Poupoular' for Mr. Unlucky. 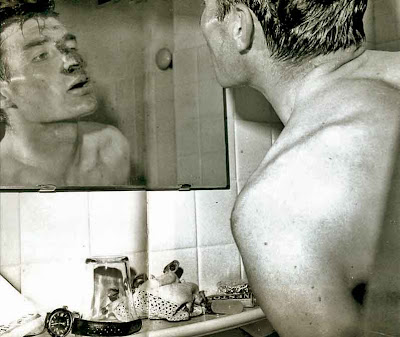 Forty years ago, Raymond Poulidor entered the 1968 Tour de France as pre-race favorite. Poupou was selected due to his strong support in helping Roger Pingeon win the 1967 Tour. With the help from Pingeon, Poupou could finally go for the overall victory…
The 1968 Tour was promoted as, ‘The Tour of Good Health.’ Official’s feared a repeat of the previous year’s tragedy of Britain’s Tom Simpson. Even Mount Ventoux along with the difficult mountains would be dropped. The battle against doping was embraced by Tour organizers. But, it didn't help with Jacques Anquetil’s brash comment that there exists the common practice of drugs amongst the riders. “You cannot compete in the Tour de France on mineral water alone,” he said. Organizer's attempted to steer the anti doping ship in the right direction, stage one was symbolically started in the mineral town of Vittel.
Poulidor started well in the opening prologue, finishing in 3rd place. But, as he entered the mountains, on stage 15 to Albi, misfortune reared it’s usual ugly head. A press motorbike smashed into him! He was on the ground for at least 30 seconds, his face covered in a bloody mess. Word got through to the peloton that Poupou was down, and now his rivals attacked. Riding with a broken nose, the amazing Frenchman clawed his way back to finish the stage on 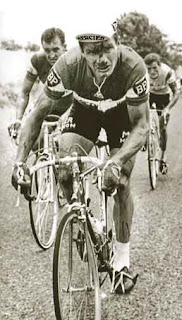 ly to lose a minute. During the next stage he would get off his bike and reluctantly retire from the race.

Poulidor’s greatest race was his beloved Tour and his misfortune was … his fortune. He made quite a tidy sum at post criteriums. More so, than his great rival Anquetil.

“When I left the Tour in 1968, I received 2,800 letters a day for two weeks. In criteriums, I was alongside Jan Janssen, who’d win the race, but I was presented as the moral winner, Anquetil was irritated by my popularity. In some criteriums, organizers used to do me under-the-table deals so that Jacques wouldn’t know I’d been paid more than him. My big luck was to have lots of bad luck,” he said.

And this was his legacy. The French instantly loved Poupou and understood that his setbacks was a metaphor for life. The more his misfortunes the closer to the heroic figure he became.
(Above): Bruised and battered. Poupou chasing valiantly on the road to Albi, stage 15. From: 'Le Tour.'
(Top): Licking his wounds. Like the heroic prize fighter he was, added to his fame. From: 'Maillot Jaune.'
Vintage Tour de France