A Devil of a good time! 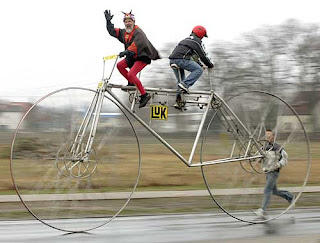 On top of the world's largest bike! 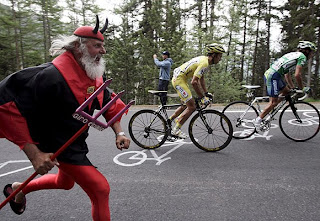 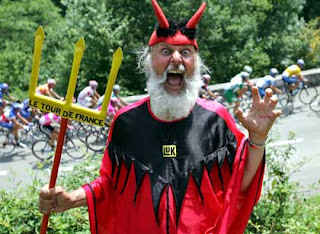 ... to a devilish welcome at the Tour!
A Tour de France prelude...
"They say the devil's water
It ain't so sweet
You don't have to drink right now
But you can dip your feet
Every once in a little while"
The Killers.
Didi Senft, aka the Devil of the Tour de France(since 1993),  is one of cycling's most famous characters. He's a 56 year old, German artist that created the world's largest bicycle and listed in the Guinness Book of World Records. A crowd favorite, the wacky Didi can be seen at major races 'poking' his trident at the unsuspecting riders. He really doesn't touch any of them, but his presence at the race cheers up riders and fans alike.
For a man dressed up as the devil with red leotards running and screaming resulting in zany shenanigans?
I'm going to the Tour!
Tour de France