The Gavia Epic; Coppino loses more than the pink.

on April 07, 2008
After what seem like years of struggling on Italian teams, Franco Chioccioli got his break and was picked to the famed Del Tongo-Colnago team. He looked like the great Fausto Coppi, and was nicknamed, 'Coppino', because of his slim build, lanky legs and beaky nose.
At the start of stage 13, Chioccioli donned the leader's Pink Jersey in the 1988 Giro d'Italia after taking it from Massimo Podenzana(Atala-Ofmega). During what might be the worse day in cycling, the ultra harsh weather added that 'extra' to the turmoil of stage 14.
"It was one of my worst days of my life, it'll go down in history as one of the worst stages in cycling. I'm still convinceed somebody didn't want me to win and that's why we were sent over the Gavia. It was my first season at Del Tongo. Giupponi was the favorite and Saronni cracked early on. We knew that the Gavia was covered in snow, but they sent us over it anyway," Chioccioli says.
"At about 5 kms from the summit I was already freezing, and Hampsten and Bruekink dropped me and Giovanetti. All I had to keep me warm was the pink jersey. I didn't have a cape or leg-warmers because my team car had stopped to wait for Giupponi. I had the maglia rosa but, incredibly, they'd left me on my own and had gone to help him. At the summit, my team car was nowhere to be seen.
"When I crossed the finish in Bormio my fingers were black because there was no blood circulating. I lost 4 minutes in 20 kms of descending and so lost the Giro to Hampsten." Only an handful of riders finished that infamous stage. Many climbed into their team cars. "Eighty per cent of the riders got into team cars and that's why a lot of the riders didn't lose a lot of time. Giupponi actually finished in the same time as me. He'd been dropped but somehow managed to get back on. The amazing thing was that his jersey was dry," he says.
Chioccioli blames his team for abandoning him on the Gavia. He would go on to finish the Giro, 5th overall, 13 minutes 20 seconds behind winner Andy Hampsten. "One minute I had the pink jersey and then the next minute I'd lost everything and discovered that my team perhaps never even wanted me to win. I finished the Giro without hardly pedaling because my morale had been shattered," lamented Chioccioli.
A cruel twist of fate?
Three years later, Franco Chioccioli ('Coppino' - 'little Coppi') did get his sweet revenge by convincingly winning the 1991 Giro! 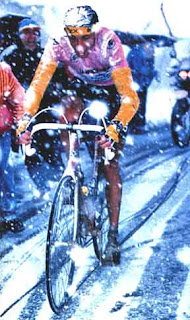 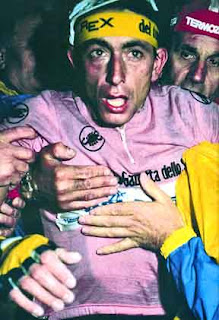 (left): Dog-tired! Coppino at the finish in Bormio with the Maglia rosa to keep him warm. He loses it after the days exploit's. A victim of team deception or the insane weather?
(right): With no team car in sight, Coppino battles in the snow in futile defense of his coveted Maglia rosa. With only a handful of riders, he'll go on to heroically finish this grueling stage in 7th!
Giro d'Italia