The Eagle of the Canavese! 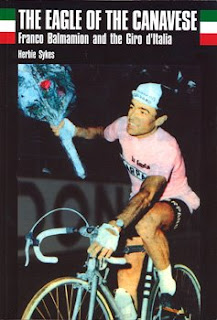 In honour of  todays Giro...

I just read up on the fine book review on, "The Eagle of the Canavese." The obscure Giro winner, Franco Balmamion who won it in 62 & 63. I frankly, don't know much about him and as I read the review my interest was tweaked!

Like most Italian riders born in the 1940's, they came from poor backgrounds. But, they also had rich influences. Balmamion's uncle rode in the 1931 Giro. The young Balmamion had his uncle's guiding hand in shaping his early cycling years. When he won his first Giri, he was only twenty two! In 1967, he finished on the podium, in 3rd. It seems he did well in the Tour finishing on the podium in 1969, 3rd overall. A fine accomplishment for a relatively unknown rider.

Do check it out at: