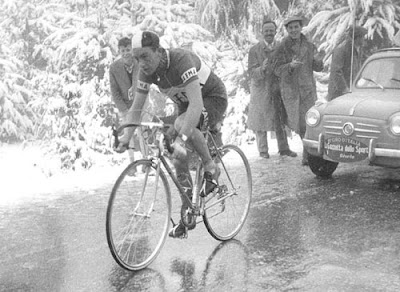 The 91st Giro d’Italia goes next Saturday. As a lead up to this great race, a tribute to one of my favorite grimpeurs; Charly Gaul.

He passed away in 2005 but he will be long remembered for his climbing exploits in both Tour’s. An highly gifted climber with a edgy temperament excelled in foul cold/wet conditions but wilted in the heat. Gaul can turn the pedals so fast and so smooth that he literally flew when the mountains beckoned. "Mozart on two wheels," was how the French writer Antoine Blondin described him. Luxembourger, Charly Gaul(pronounced gowl) was also well known for a particularly 'moving' incident at the 1957 Giro d’Italia …
Four stages left, Gaul was betting on overall victory. Why not? He scored a miraculous 1956 Giro win! And now, he was leading the race followed by Italian Gastone Nencini and French triple Tour winner, Louison Bobet. By passing up the Tour, the confident Bobet wanted to become the first ever Frenchman to win the Giro.
With two third’s of the stage left, Como to Monte Bondone, some riders decided for a nature’s stop. Among them, Nencini and Bobet dismounted for a pee. Further along, race leader Gaul did the same. As Bobet rode by the relieving Gaul. The Luxembourger, who hated Bobet, made an indecent gesture with his 'member' at the Frenchman. In cycling, there is a temporary truce of not attacking during a nature’s call. Bobet was miffed by the gesture and he instructed his team to react and quickly sped away. Gaul, had never a powerful team, lost over 8 minutes and any chance of overall victory.
However, the Luxembourger's race was not entirely over ...
During the next day’s final mountain stage, Bobet seemed destined for overall victory, just having dropped Nencini. In the lead, Bobet looked to the road below and watched in shock as Gaul paced Nencini patiently up the mountain. Gaul took it to his French nemesis and put a knife into Bobet’s chance of overall victory. He sided with Nencini and helped him win the Giro by a scant 19 seconds over the luckless Bobet. Gaul's revenge was sweet and complete!

1957 Giro d'Italia. The Final GC:
1. Gastone Nencini(Italy) 104h 45' 06s
2. Louison Bobet(France) 19s
3. Ercole Baldini(Italy) 5' 59s
4. Charly Gaul(Luxembourg) 7' 31s
Charly Gaul lost that 1957 Giro due to his foolhardy stunt but nevertheless assumed two nicknames that would stick forever; “the angel of the mountains” and ... “Monsieur Pipi".
And another thing, he also discovered the art of urinating on the bike.

What a relief!
1957 Giro d'Italia Photos:
(Top): Rider of the Storm. When the weather turns nasty, Gaul's in his element.
www.gazzetta.it
(Above): The Angel of the Mountains. Gaul usually battled the mountains by himself!
www.dewielersite.net
(Middle): 1959. Smiling Enemies. Bobet(left) & Gaul(right).
From: Cycling's Golden Age.