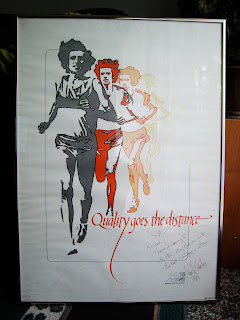 In September of 1981, I travelled down to the runner's mecca; Boulder, Colorado. I heard that it was 'the hotspot' for runner's, cyclist's, athletic types and just plain outdoor devotees. I wasn't disappointed.
I'm a former runner who joined the boom of the late 70's and early 80's. It was the perfect place to gather, train and live in. A great middle place nestled between the crowded east coast & the bustle of the west coast. Before switching to cycling, I was a long distance runner and ran my share of 10 km, 15 km, and 20km races. I was training for my very first marathon and wanted to see Boulder and it's running culture. The majestic Flatirons (foothills) provided a fantastic area for altitude training. It wasn't the only reason why I was there...
American 1972 Olympic marathon gold medalist, Frank Shorter, opened a runner's store there and I just had to see him. I remembered watching him on television and coming in second at the 1976 Montréal Olympics, and after seeing him race cemented my reason to run. Unfortunately, I didn't get to see Shorter, due to his hectic schedule of television broadcasting in Europe. So I was told. And I did what any fan would do, I bought a poster and left it for him to sign it. Later, I received it in the mail and was pleased of what he penned!
"Quality Goes The Distance" are words that still ring true for me today while I'm out enjoying my bicycle. And it's what you do with it, as in life ... is what really matters! 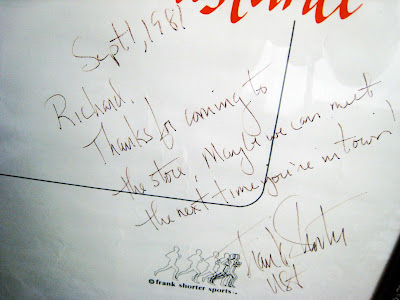 Nice message from the Olympic Champion!
(Above): 'Quality (INDEED) Goes The Distance'. It's still timeless after all these years!