Body parts that go bump in the Giro. 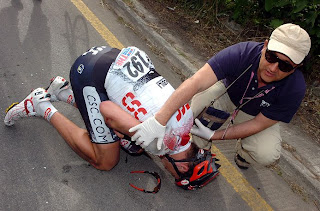 Unavoidable mishaps plays a 'big hurt'  factor into the early days of the Giro. This race, along with the large field of riders brings with it plenty of drama and unpredictability. So it was on stage 3 of the Giro d'Italia that the drama continued...
Stage 2 winner and points leader, Riccardo Ricco('The Cobra',  Team Saunier Duval) fell with a group of twenty and limped home with a injured left finger. But, the most ominous physical trauma was directed to  two CSC riders, Bradley McGee and Stuart O'Grady. They both sustained injuries to their collarbones and are out. Certainly, a slap in team CSC's face.
Back on stage 2, climbing sensation  Mauricio Soler(Barloworld) suffered major scrapes to his knees and elbow  but got back into the race, with the help from teammates.  Dave Zabriske(Slipstream-Chipotle) crashed heavily to the side of the road and it looked serious. The promising American, who looked so good in the team time trial, was a masked of pain as he was helped into an ambulance. Damaging a vertebrate,  he was pulled from the race and out of the Giro.
"The early stages of Giro are always dangerous and the last few kilometers were very bad. I stayed near the front out of the trouble, but behind it must have been crazy," said stage 3 winner, Daniele Bennati.
And it's only ... just  begun!

Stuart O'Grady tries to get back on his bike,
but his injured collarbone has something else to say! 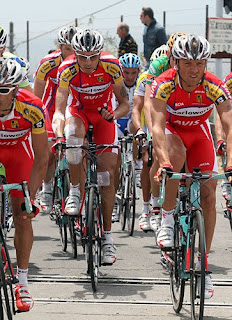 Tender but riding.
Colombian super climber, Mauricio Soler wrapped up for stage 3.
(Top): Bradley McGee feeling the pain after breaking his collarbone. He was hit by another rider who swerved into him after missing a corner!
All photos: www.cyclingnews.com
Giro d'Italia