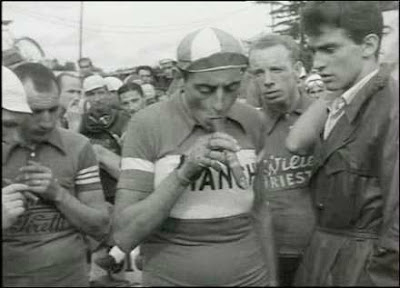 At one point,  smoking was an accepted norm in cycling and other sports such as professional hockey. In the seventies, Montréal Canadiens star, Guy Lafleur was famous for his scoring abilities  and was known to indulge a la cigarette in between periods. In fact a few players did because it was a way to unwind.
Cycling's early days  'endorsed'  unlikely sponsors of cigarette companies; Willem II and Boule d'Or. The great  Eddy Merckx  smoked.  "In 1968, during the Tour of Italy, the team doctor advised me to smoke a cigarette after my evening meal to help me relax," said the Cannibal.
Teammate, Roger Swerts added, "I always had cigarettes with me. Eddy himself, though, couldn't afford to be seen with a cigarette, as it would not have been good for his image. He did come to my room regularly, though, to have a smoke. He was terrified of being caught, and when he did smoke it was always behind closed doors."
The Cannibal appeared in advertisements for one cigarette company, R6. "The spirit of the time was different, of course. Being a sportsman and a smoker do not go together. Anyway, I never actually incited anyone to smoke in those ads, " he said regrettably.
And since the eighties, that image of sportsman and smoker was not the right one to display so cigarette companies were not permitted in cycling sponsorship and eventually went ...  up in smoke! 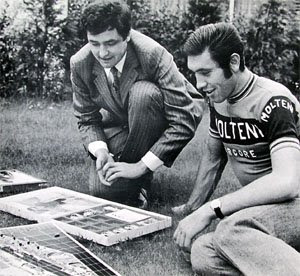 The Cannibal relaxes in a healthier way, with a board game.

Unknown said…
I heard that they believed it would open their lungs. Not sure when or why but I did hear it through the grapevine, you might be able to shed some light on this with you historical knowledge
May 18, 2008 at 8:29 PM