F is for Fans! 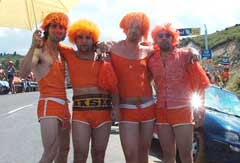 The crazy Dutch fan's on top of the 'Dutch mountain' L'Aple D'huez.
www.cyclingrevealed.com
The Tour is coming.
The largest open free sporting event  in the world is the Tour de France. People from all over the world follow the race throughout the French countryside sometimes camping out.
After Joop Zoetemelk's victory on top of the Alpe d'Huez in 1976, crazed Dutch fans have camp there for days among the half-million spectators. With the most wins by any country(8 wins) it's also called, 'the Dutch mountain.'
Here's to the fans, who maybe the true stars! 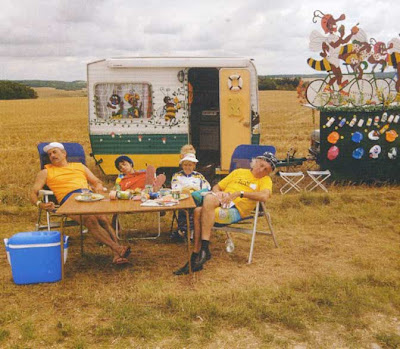 Asleep at the wheel?
No problem. These fan's will know when it's time to wake up!
From: Ride-Cycling Review No. 38
Tour de France