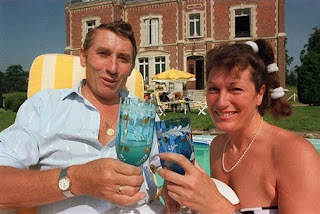 Jacques Anquetil enjoying his other two loves just 3 months before his death in 1987.
www.cyclingnews.com
"bon vivant": a person with refined and sociable tastes, especially one who enjoys fine food and drink.
Best describes the great french cyclist, Jacques Anquetil. He was the first 5 time winner of the Le Tour and he did so without sacrificing the bon vivant lifestyle. His cool and calculating style of riding won him few friends, if any. And, Master Jacques never let the sport dictate his life. His diet was of a bon vivant. A taste for red meat, seafood, champagne, late night card games and women was what he naturally embraced. He was known to eat plates of shellfish washed down with a bottle of Muscadet wine during the Tour. He arrived to races in his sport car - playboy hip.
"I drink a lot of alcohol, in fact far too much alcohol. I hardly ever drink water except if I am thirsty in a race. I used to drink about four or five pints of milk a day, but since my former trainer, Julien Schramm, told me that it was toxic I drink beer instead," he stated.
Because of his single mindedness and strong willpower pushed him further into the rank of cycling legend. He claimed to train on cigarettes and beer but rode, with one thing in mind ... to win. He suffered too, when he over ate on roast lamb during the rest day in Andorra at the 1964 Tour. The next day in the Pyrenees, indigestion, nearly cost him his 5th Tour. Anquetil drank some champagne, placed in his water bottle by his director sportif Raphaël Geminiani, which helped him back in the race.

I admired his lust for life, but in the end it claimed him. In 1987, Master Jacques died of stomach cancer at the age of 53.
Next: 'Monsieur Chrono'
Jacques Anquetil Vintage Tour de France