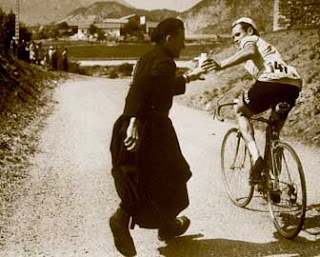 One for the road me son.
Monks and beer go way back in mountainous stages of the Tour
From: 'Ascent. The Mountains of the Tour de France.'
In 1910 the 2,000 meter high Pyrenees made their debut. The dirt trials were nothing more than cow paths but a bike race? Tour de France organiser, Henri Desgrange balked at the idea but relented because it would be a showcase for the fans. And virtually a hot reason to sell L'Auto newspapers.
The legendary Col du Tourmalet was introduced and thats where on stage. 10 that Octave Lapize captured the first victory. Many withered, struggling up the soon to be famous passes; Aspin, Aubisque, Toumalet, and Peyresourde. Most of them ended up walking. Desgrange also introduced the 'voiture-balai', or broom wagon, a van to pick up the poor riders who could not continue on.
During those early years, high up on those mountain passes religious monks would greet the riders with tins of beer. A nourishment for the walking riders that made it over the top. 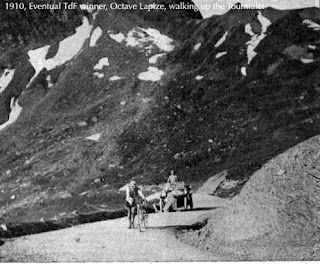 Octave Lapize walks up the Tourmalet. Lapize screamed, "Assassins!" as he passed Tour officials.
www.steephill.tv/galleries/2005/high-pyrenees/
And as for the fans, if they wanted to follow who was leading in the days new mountain stages they were obliged to buy L'Auto. The sports newspaper was the winner with a circulation from 1908 of 150,000. Doubling in 1910 to 300,000!
Beer Vintage Tour de France