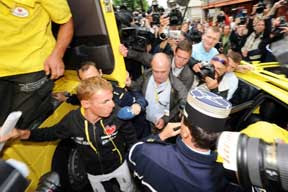 I'm floored like everyone else with the news of Riccardo Ricco's Cera doping implosion. I just talked to my friend, Victor, and still was livid from the shocking news. He didn't hear about it, yet so I was even more excited. Yes, I went through emotional freefall of disbelief, shock, frustration, and anger. And now in the wake of it I can easily agree on Stephen Roche with his direct comments, "We're going on 10 years now since the Festina affair. You can't say I didn't know or I'm very, very sorry. No, over. Anybody who is caught now, their licence should be torn up and forgotten about forever." This may be the only way for pro riders to understand. For Ricco who is 24 years old caught for doping, may get a 4 year suspension, comes back into racing after 4 years and continues earning a lot of money off of it. Unfair and downright criminal, I say. It's just a slap on the wrist and frankly the rider would not learn from his mistake. Or even admit it.
Ricco is young, if he's bandished from professional cycling life he can probably collect himself and find a new career. For his deceit, he most certainly created the worst mistrust to cycling fans everywhere. I became one, sensing that this young up and coming rider can win the mountain and young riders competition. Now he won't. If found true, he will have his two stage wins annulled. And rightly so.
It's unfortunate that the Saunier-Duval team left the Tour. They could've stayed, like Liquigas and Barloworld. I think about how Leonardo Peipoli is feeling, and how tainted his stage 10 Hautacom victory is. Now the team is gone and talking about disbanding from cycling completely. Sadly everyone will know that this Tour was the one that the idiotic Ricco pissed away and the talented Saunier-Duval team walking out. I still love this wonderful sport and will continue to follow it, no question about it.
But for now, the DOPE HOTLINE is open ... just ask for Ricco!
Grimpeurs Tour de France

Jason said…
Lets hope that Peipoli and the rest of the Saunier Duval team weren't also doping, it would be no surprise if they were.
July 18, 2008 at 4:59 AM

Unknown said…
you might need to stat deleting posts at the rate riders are falling by the way side. sure you heard about piepoli, looks like the whole team was taping into their inner EPO
July 18, 2008 at 11:04 AM