No words only deeds. 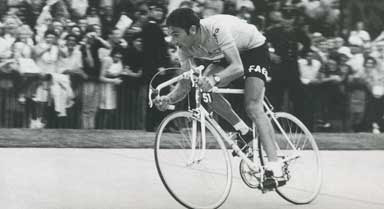 Eddy on the Vincennes Velodrome, Paris 1969. His first Tour will soon be his!
Actions speak louder than words.
From: 'Tour de France/Tour de Force.'
Phil Leggat on Eddy Merckx's modesty...
"Eddy and I walked into a pub and four older guys pointed to him and whispered, That's Eddy Merckx! Well Eddy just walked over to the bar and ordered four beers to the guys."
Eddy Merckx