Thrills & chills in the hills! 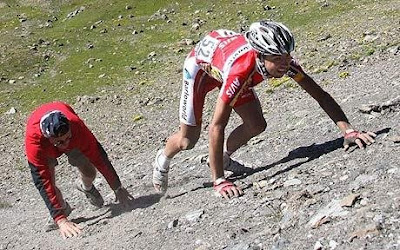 With a bystander in tow for help. John-Lee Augustyn makes his way up the mountainside without bike. I thought that I was going to fall off my couch when he dropped out of view!
www.telegraph.co.uk
This years exciting Tour is full of amazing riding and ... incredible nasty falls. I watched in horror as Barloworld's John-Lee Augustyn nearly became this year's angel of the mountain as he misjudged a right hand bend and flipped over the edge in a small cloud of dust. He's the youngest rider at this year's Tour, only 21, but proving to have a future as a very good climber.
As he became the first over the top of the highest road in Europe, the 2802 meter Cime de la Bonette-Restefond, he became a part of Tour history. Augustyn is in very good company as he's the third climber to ever reach the roof of the Tour. Spain's Frederico 'the eagle of Toledo' Bahamontes did it in 1962 & 1963. Scot, Robert Millar crested the top in 1993. Helicopter pictures caught him over the mountainside as a bystander jumped down to help him back up. There he waited a couple minutes for the team car for a replacement bike. He would finished in 35th over 5 minutes from stage winner, Cyril Dessel(Ag2r).
His words were blunt, "I was lucky to get away with no injuries. Just before I went over the side I thought, shit, I'm going to break something again and it's going to be terrible. I took the wrong line and was just going too fast. I saw the corner coming, and tried to brake, and I hit the corner and went over the side. I was lucky to come to a stop again and get back to the top."
Was he fortunate. I think he'll need to work on his downhills!
Grimpeurs Tour de France