The Canadian gold goes to ... Cervélo? 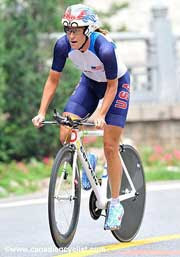 Canada's first gold?
Not to take anything from American Kristin Armstrong's great victory, but she did win on a Cervélo!
With talk in the Canadian media concerning the country's ZERO medals, we Canucks can finally be happy. Yes,  Canadian bike manufacturer, Cervélo won the country's first gold medal in the Women's Time Trial. American Kristin Armstrong took the gold on a ... Cervélo.
Of course, that's only if we can convince the IOC that a  bicycle can win the coveted medal!
fun Gear and Equipment Olympics