A battle of attrition and worthy conquerors. 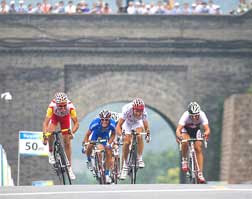 A great win by the Great Wall.
Sammy Sanchez(far left) puts the hammer down to Olympic glory.
Rebellin(silver) and Cancellera(bronze) dragged themselves in for the next medals.
"It feels like like you have a hot cream all over your body."  Juan Jose Haedo, DNF.
After watching both Men's & Women's Olympic road race I was simply... exhausted. It's definitely the year of Spain and they were  the stars once again! Climber, Sammy Sanchez with help from his conquistadors  proved that to win you must have a strong team. They did. However, the real challenge was from the big three; heat, humidity and haze. I have high admiration for the riders who endured the oppressive Chinese heat. The heat was so bad, Olympic course officials  set up  a "shower zone" to help fight off the sauna-like conditions. Special kudos go to the Canadians; Ryder Hesjedal(56th), Michael Barry(9th) and Sven Tuft(59th)  for their fine performances.
"I wasn't expecting rain. Sometimes I felt like I was actually drowning!"  Emma Johansson, Silver medal.
I'll call her, "the monster." Huge respect for Welshwoman, Nicole Cooke who did what she wanted to do, win the gold medal. Both men's and woman's road race ended on an uphill sprint. And, both times it ended  in excitement. The weather for the woman's final was a sharp contrast to the men's sauna-like final. It was pouring buckets. Looking  like a typical winter day in Vancouver. During the last meters I thought Cooke was losing site  of the group but she pulled it all together and gutted it out for a memorable victory. I liked the gallant last lap attack from 19 year old, Russian Natalia Boyarskaya. She showed a gutsy move as she counter-attack with some 50 kilometers left.
The awful weather conditions for both races were really the big factor. The rain soaked roads turned into a skating rink. Just asked, unlucky Canadian and medal hopelful, Alexandra Wrubleski. She crashed with another rider and lost time on a sharp slippery turn waiting for a replacement bike. She finished 50th. The heavy rain and descending included another hazard. Wet riders + cold = shivering cyclists. Uncomfortable working conditions to be sure. 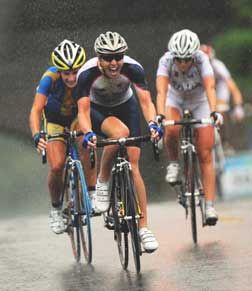