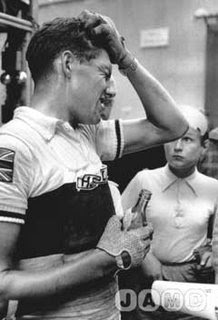 That's Freddy Krebs not Tony Hoar who eventually abandoned on stage 11, 1955 Tour.
www.jamd.com
As I'm watching the men's olympic road race and cheering on the Canadian team, I was pleasantly directed to an email from the famous Lantern Rouge of the 1955 Tour de France, Tony Hoar!
He corrected me on the above image is that of former teammate, Freddy Krebs not himself and that Tony rode for the Hercules team during his only year as a pro back in 1955. I want to thank Tony for this as sometimes I'm not always as accurate as I think I am. And come to think of it, it's nice to be humbled by a famous former Tour rider!