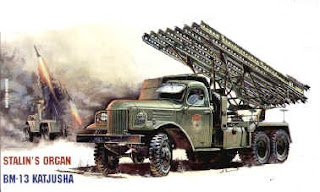 No more Stalin's organ.
Now, Katyusha is firing boatloads of cash out to the cycling market!
www.diggerhistory.info/
Katyusha, the big money Russian cycling outfit(budget worth 30 million Euros) has fired a multiple rocket launcher of money at a few big names. It signed on notable big guys: 3 time Tour green points jersey winner, thirty-six year old veteran sprinter, Robbie McEwen and mullet man, Vladimir Karpets. You may remember back at the 2004 Tour, Karpets held on to finish a superb 13th overall and snatch the white young jersey classification. His huge win was overall at the 2007 Tour de Suisse.

McEwen seems happy!
www.abc.net.au
The Russian team already has other biggies signed; Italian Filippo Pozzato, Alexandre Botcharov and fastman Gert Steegmans. Katyusha is now going after Tour winner, Carlos Sastre whose CSC contract is up at the end of this season. Why not? Big names equals big publicity for the giant Russian cycling team and that's what they want.  And, timing is next to perfect for the multi-million dollar team as many riders will be left without homes at the end of the season. Teams unable to find sponsors that will not be back are: Gerolsteiner & Credit Agricole.

Mullet man, Karpets on board for 2009.
www.cyclingnews.com
There's a reason why I mention, 'rocket launcher.' Katyusha is a Soviet rocket launcher from World War Two. Also called Little Kate, it was a rocket launcher mounted on a heavy truck that fired volleys of up to 48 rockets  4 miles away. German troops quickly learned to fear its distinctive scream and nicknamed it, 'Stalin's Organ.'
Now, Katyusha is back this time firing huge gobs of money at new cycling targets!

But is Tour winner Carlos Sastre stepping down from CSC and moving up to Katyusha? The Russian team certainly hopes so!
www.cyclingnews.com