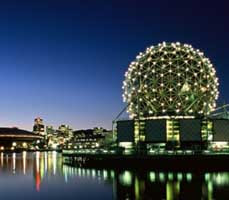 A view of Vancouver's Science World.
Last evening I was out for a short ride past Science World and as I was waiting for the light to change I heard a voice behind me. "Hey, what kind of frame is that? It sure looks fast. What's it made out of?" I turn around and looked at the portly, white bearded, older guy on a touring bike.
"Oh, it's a Marinoni racing bike made outside of Montreal. And it's Columbus SL tubing-steel that is," I answered. The conversation expanded as we began the ride up Ontario Street. "Mine is Tange and it's a Vancouver made Legge," he said proudly. I decided to slow down with him. The evening was spectacular, with a beautiful sunset and the start of dusk. We both had our lights on making our way home. His name was Abe and he was cycling home from work. He's originally from Montreal and 'around.' I added, "I'm from Edmonton moved here in the late eighties." Abe asked me what I thought of cycling in Vancouver. "I find it getting congested. Hard at times," I replied. "Funny, I don't find it that way," he said. We were beside the Anza Club(a venue for music bands) where Abe was just about to turn left. "This is my turn, nice to meet you," he said as he got ready for his turn. "Enjoyed the chat, it's a small city we're bound to bump into each other again, have a good evening," I said with a grin. Our conversation made the climb feel pleasantly shorter.
And with lights on, I thought to myself what it was a joy to ride in the evening!
fun rides