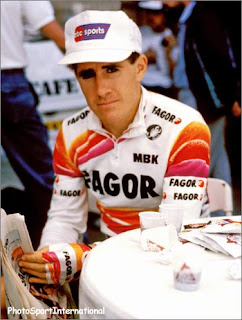 Already thinking about becoming an Journalist.
Paul Kimmage in the 1989 Tour. He'll drop out on stage 12. This was his last year as a pro with French team Fagor.


I've finished reading the highly enjoyable and revealing book - Paul Kimmage's, 'Rough Ride.' A storied account of surviving as a domestique in the professional peloton. Nothing close of glamorous. The Irishman raced for only four seasons and never won any races. Thats where it's so interesting, he shows how it was for him and really for the majority of riders clawing away at the back end of the peloton. Taking care of superstars: Stephen Roche, Sean Kelly and the late Thierry Claveyrolat. He was the first to really 'tell it all' of doping practices yet not directly naming Roche or Kelly to the use of drugs. The cycling world has a phrase for it, 'Craché dans la soupe or Spat in the Soup.' Kimmage was surrounded and pressurized to dope as he felt it was necessary for survival and advancement. After the 1989 Tour, he quit disillusioned with the drug scandals and now writes for the Sunday Times of London. I found the book to be both shocking and accurate explanation of the hidden, seedy, underside world of professional cycling. Casting a light on the unsavory world of doping has since made Paul Kimmage a pariah.

His was and is a rough ride!

"He said I wasn't ruthless enough to be a pro cyclist."

-A comment by journalist, Phillipe Burnel to Kimmage during an interview for L'Equipe.

"I want you to get up now. I want all of you to get up right now and go to the window. Open it, and stick your head out and yell, I'M MAD AS HELL AND I'M NOT GOING TO TAKE THIS ANYMORE!"