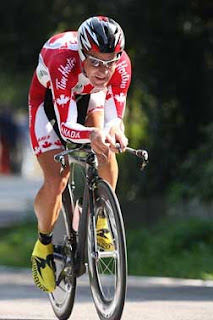 Fantastic job, Svein!
www.cyclingnews.com
Svein Tuft made  Canadian cycling fans  ecstatic with his 'surprise' silver medal at the World ITT! And, with his silver, Tuft is the second Canadian behind Steve Bauer to ever win a men's Worlds cycling medal. Bauer won bronze in the road race way back in 1984 in Barcelona.
Amazingly, Tuft flatted with six km's left and with a great bike change still managed second place. The 31 year old Tuft has move up that tough competitive cycling ladder and into the European ranks. He's  signed for two years with Garmin-Chipotle and better things are destined. Team manager, Jonathan Vaughters proudly said, "We signed Tuft. Before the Worlds, mind you. I've wanted Svein for two years now. He has been around for a while but has never had a chance in the big league, so we want to give him a chance."
His silver performance is looking more like a golden opportunity!
And twenty-four years ago... 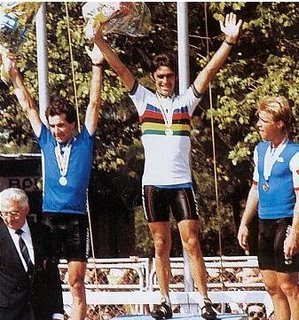 Groover said…
Congrats on an outstanding performance and the piece of histry once again. Where was the 1984 World Championship?

Richard said…
Thanks very much. Barcelona was the hot spot. Excellent ride for Grabsch!
September 28, 2008 at 8:40 AM