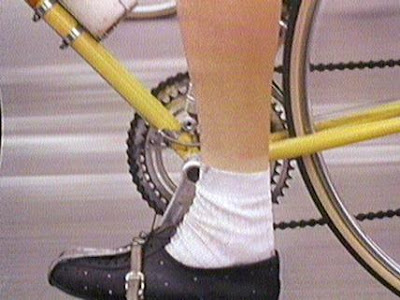 The classic shoe, pedal and white socks. You know it's going to be good.
www.nfb.ca


Hans lent me the wonderfully captivating movie called, ’60 Cycles.’ Never heard of it? You should.

Produced by the National Film Board of Canada in 1965 by the award winning (22 major international awards) documentary Quebec film maker, Jean-Claude Labrecque. It chronicles the eleventh Tour du St. Laurent held in 1965. The longest amateur bike race with 2400 km of rolling picturesque Quebec Gaspe bay countryside. Montreal is here, too with Parc Lafontaine as one of the battle grounds. I remember the park well. I used to live beside it.

Riders from thirteen different countries are represented and the striking visuals are enough to keep you riveted. Notably, the Canadian wool jersey with the green maple leaf is very cool. But, only 16 minutes long and worth every artistic minute of it. It’s simply perfect. Beautifully filmed. 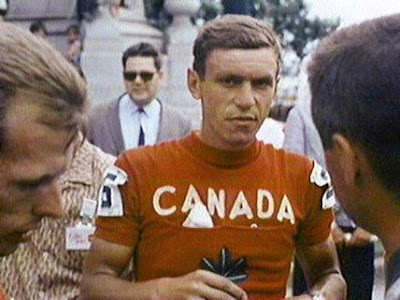 The jersey is unique as the short film.
To view this great film; just click below!

Matthew Forsythe said…
you can watch the whole film here: