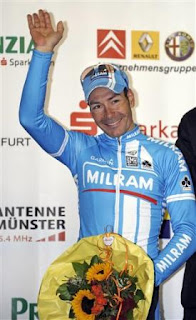 Erik Zabel bows out in Germany.
www.uk.eurosport.com
Last year at the 2007 Tour, Alexander Vinokourov rocked the cycling world with his expulsion testing positive after a blood test. He clearly exited the Tour and retired from cycling. His cycling career abruptly ended, or did it? The disgraced rider has now announced his return to cycling alongside the big Texan. Young Astana captain, Alberto Contador appears to be on shaky ground. Now, can the Astana ship support all three? It looks a team destined for either cycling greatness or failed hoopla.
On the other hand, 38 year old Erik Zabel(Milram), will retire at the end of the season. One can’t help but admire him for his six consecutive Tdf green jerseys(1996-2001), and starring in the superb cycling doc, ‘Hell on Wheels.’ Zabel finished second at the Sparkasse Munsterland Giro. Saying goodbye in front of his German fans. “I want to thank everyone for the many wonderful years and leave as a friend of cycling,” said the gracious Ete.
Belgium rider(Silence-Lotto), Wim Vansevenant, will also retire at the age of 37. Better known for holding the amazing record of three consecutive Tdf Lantern rouge(2006, 2007, 2008). Vansevenant said, “I’m proud that I’ve written a little bit of history with that Lantern rouge. It will always be linked to my name and I hope that I inspired other riders, just like the seven Tdf victories from Lance Armstrong.” Well said.
It seems Vino & Lance haven’t gotten the message…yet! 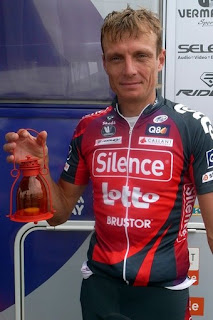 Lord of the Lantern Rouge.
Vansevenant with a lantern rouge at the 2008 Tdf.
He'll bow out from cycling proudly winning three consecutive ones!
www.daylife.com
Inspiration