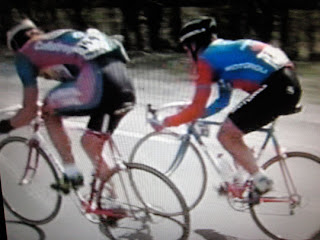 Early in the race.
Steve Bauer(Motorola) powering well in the 1992 Paris-Nice.

After a nice Wednesday visit with Hans, I rode home and settle in to re-watch the 1994 film, ‘Steve Bauer-Inside Out.’ And, you know, after seeing it a multitude of times I admire it even more.

It’s another fantastic National Film Board of Canada cycling film crafted superbly along the lines with the famous, ’60 Cycles.’ Canadian, Steve Bauer is the true star following his tumultuous 1991-1992 season. I still see it as an excellent gauge into the world of professional cycling. Director, Bob Fortier does well documenting the exploits of the 1992 Paris-Nice as the premiere stage race of the early season. Familiar riders are here including Motorola riders: the ponytail Phil Anderson, tall & lanky Sean Yates and sprinter Michel Zanoli. Notably, young Lion Cub, Mario Cippolini is a sprinting beast and he’s in great form along with Paris-Nice winner, J.F. (Jeff) Bernard. Also interviews with Bauer’s coaches, family, cycling experts & journalists provide an intimate portrait of the cyclist. Bauer power is certainly here, as the film positively shows him as a great veteran rider… and struggling through a difficult season.

It wasn’t easy for Bauer, at a major junction in his career, Motorola employed him as an hopeful winner in the Classics. Remember his near claim to cycling immortality coming within millimeters of beating Eddy Planckaert at the 1990 Paris-Roubaix? During this time, the outcome from the court case by Claude Criquielion hung over him. The 1988 world championship was hardship for Bauer as he clashed with Criquielion towards the final sprint. Bauer looked toward rainbow destiny. But, both fell and Criquielion sued Bauer incredulously for assault asking for $1.5 million in damages. With the classic fortitude of a battered hero, Steve Bauer emerges upbeat and positive even though the stress lines are clearly visible on his face.

Cranking in at just over ninety-eight minutes, the film brings a fascinating look into Canada’s greatest road cyclist and opens the backdoor into the world of cycling. A word of advice, it’s probably difficult to find, but if you can… get it, watch it and keep it. I bought it fourteen years ago and it has to be one of my favorite cycling films! 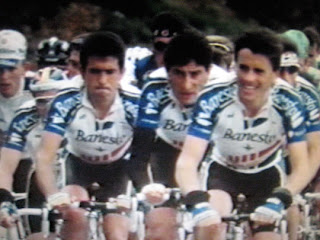 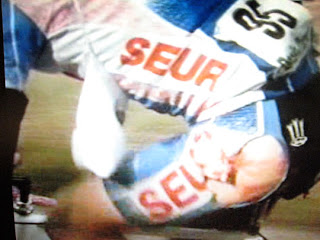 Tough night ahead for this rider.
"You won't go fast enough if you're not hurting yourself out there."
...Steve Bauer
dvd Paris-Nice Paris-Roubaix Review Steve Bauer World Championships